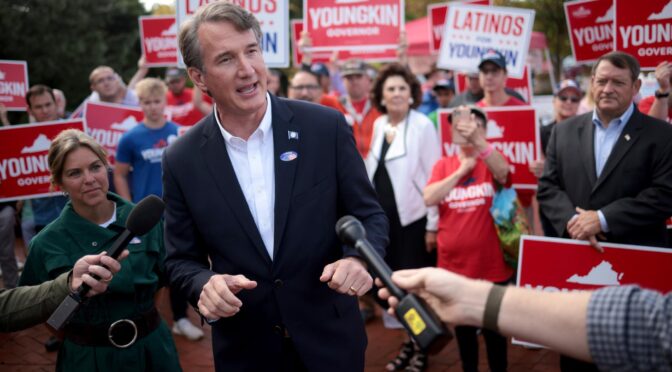 Editorial Board of the 53rd Regiment

Endorsing Youngkin is a slam dunk! Nothing says awful like Terry McCauliffe, hence the well deserved nickname of Terry McAwful.

Youngkin is a proven leader and a successful businessman. He gets it and understand the struggles of Virginians and the excessive government overreach by federal, state and local governments as it relates to education, masks and vaccine mandates. McCauliffe is a career Clintonite that associates with the worst of the worst. He is known in Democratic circles as “Mr. Dirty Tricks.” He built the DNC’s strategy that is known the “Politics of Personal Destruction.” When the Clintons needed a bagman, Terry was always close by.

Youngkin is not a politician. Refreshing! He’s a homegrown Virginian  that spent the last 30 years raising his family, practicing his faith, building a business and creating jobs. Youngkin is guided by faith, values, and an unshakeable belief that Virginia should be the best state in the Union. Youngkin believes in America, and will put Virginians first.

McCauliffe, Northam and the Democratic Party have decimated Virginia. The Virginian recovery from the pandemic ranks in the bottom 10 among all states. Our students are behind in school and have had Critical Race Theory and pornography shoved down their throats by Schools Boards and the treacherous National Teachers Union. Violent crime has risen to 20-year highs, and much of government, like the Virginia Employment Commission and Department of Motor Vehicles, is broken. People are voting with their feet and leaving the Commonwealth. Taxes are higher, inflation is soaring and Virginian families are being dumped on by bureaucratic tyrants stealing our freedoms and eliminating parents involvement in their children’s education.

It’s time for bold leadership. Glenn will make sure Virginia has better-paying jobs, the best schools, the safest communities, and a government that works for you. His game plan will create 400,000 or more jobs and make sure every student graduates college or life ready to enter the workforce.

Glenn will cut exploding costs for families and relieve the burdens of inflation and taxes. He will cut regulations to create jobs and make it easier for innovators and entrepreneurs to get small businesses moving again. He will restore our high standards for schools and our students, ban critical race theory, invest in our teachers and schools, and empower parents with real choices.

He will defend – not defund – our law enforcement heroes, end human trafficking, and rescue our failing mental health system. And Glenn will make state government honest, efficient, and modern.

While moving forward on these priorities, Glenn will protect our constitutional rights. All of them including the first and second amendments. The result will be a Commonwealth where businesses can prosper, students can thrive, communities are safe, and people – not politicians – are in charge.

It’s going to take a new kind of leader, not a failed politician looking for a second chance like McCauliffe’s gross failings. When Glenn is Governor, we will get it done together.

McCauliffe set Virginia back a decade. No more! Youngkin will fix Virginia and he is well prepared to get to work.