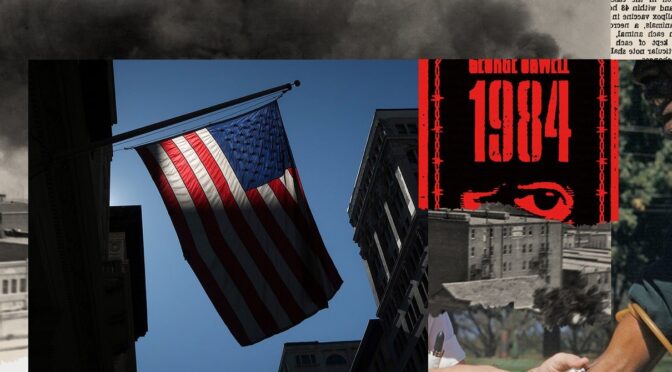 Pelosi shoves a little girl, the daughter,  of a new GOP Congresswoman being sworn in to Congress while posing for a picture. 53 illegal aliens are found dead in the back of a semi-trailer being transported across the border illegally in Texas. Media is mostly silent. The January 6th committee hearings go prime time for their one- sided affair. Gas prices surge over $5 a gallon but the Keystone pipeline and new drilling permits are not an option. Congress swiftly finds $40 billion dollars to give the Ukrainians. Stock market down 20% in the last six months.

The liberal new world order is a dystopian nightmare and Biden has fast tracked it here in America. Break the economy, turn the military into a leftist institution, use climate change to drive judgment of citizens and empower the government, only follow laws democrats like and empower the Trans agenda to confuse the masses. Biden’s America. Dystopia.

“For evil to flourish, it only requires good men to do nothing.”
– Edmund Burke

“This is about the future of the liberal world order and we have to stand firm,” said White House advisor of National Economic Council, Brian Deese, former China CCP loving Blackstone executive. Did Americans ask for this? No! The Biden Administration is at best an unrepresentative government. The reality is they do not care one bit what you think. This is about destroying the middle class, creating a one party state and absolute power.

US Economy. Biden has delivered the worse US economy since the 1970s. The CPI is 8.6%, this is a conservative estimate by the way, and is a 45 year high. Energy CPI is up 43% overall with gasoline prices having doubled since Biden took office. Used cars are up 42%. Mortgage rates have doubled to 6% crushing young families and taking them out of the housing market. Even for incompetents like Biden and those that surround him, crashing the US economy this hard and this fast is hard to do. The democrats plan to crush the middle class and build dependency, otherwise known as “Build Back Better (BBB).” It is working. BBB is all about taking wealth from the American middle class and growing government dependency while crushing the American dream. Democrats have once again delivered on destruction.

Woke Military. After the Afghanistan debacle, morale in the military could not be any worse. Recruiting numbers reflect it with the US Army missing its mark by 23%. What young man or woman wants to be led by Biden, Austin or Milley? It’s an intentional mess to weaken military readiness while standardizing Critical Race Theory, Anti-Racism and DEI into all the military formations to create a left leaning woke military. Biden & Austin have put in policies that create division and have leaders looking over their shoulders instead of being focused on their war fighting mission.  After all, General Milley wants to know about “white rage.” The Soviets had political officers in their formations. We now have DEI Officers. What’s the damn difference?

Environmental, Social and  Governance (ESG) Credit Score.  Control, power and dictate behavior eradicating freedom. Americans are asleep as the tyrants in the US government and environmental whackos roll out ESG credit scores on companies and citizens to control us. Major banks are rolling out a new platform and their lending practices will be driven by your ESG score. What, you ask, does that mean? What you buy and sell, what charities you support, and your environmental impact are being tracked and translated into a score. Sounds like China CCP? Well, this is here at home in America.  It will affect whether you qualify for a car loan, a home loan, a business loan, or if you are a good credit risk, eventually even applying for a job.  Part of the Great Reset, control the masses. “You will get nothing and like it,” Klaus Schwab told the audience. Did you buy a gun for example, or give to a particular political party candidate, or do you purchase meat? What kind of car do you drive, and how often do you drive it? This is the Democrats plan to manage Americans and dictate the right behaviors.

Rule of Law. Democrats have no respect for the rule of law. Sanctuary cities, wide open borders and city Mayors & Attorney Generals who do not enforce the laws. Catch and release, no bail and defund the police movements. Murders and criminals commit crime after crime and they are put back on the streets. When democrats do not like Supreme Court rulings such as overturning Roe vs Wade, their mob goes to the justices houses to threaten them; they vow to impeach the justices; they vow to pack the Supreme Court. Democrats only respect you believing what they believe. They are tyrants. When things don’t go their way, they orchestrate violence, attempt to change the rules like eliminating the filibuster. Democrats do not believe in the US Constitution. They believe in tyranny and one party state control.

Trans Agenda. Democrats in their push to mainstream the trans agenda and all the perversion that goes with it, are now pushing for a Trans Bill of Rights.  Sexualizing kids in kindergarten through elementary school, pushing trans into the classroom and pornography into children books, Democrats have showcased themselves as morally bankrupt and perverse.

Biden’s America is a deep dark place where people feel helpless, families are struggling and people are left fearing that not only America has lost its way, but that they are not allowed to speak up anymore. I’ll be canceled or worse the FBI will come for me. Serious damage has been done to America with censorship and the First Amendment being put at risk. All of us need to fight back locally, statewide and at the federal level. Our country needs the moral majority to stand up. Patriots, we are all on notice.