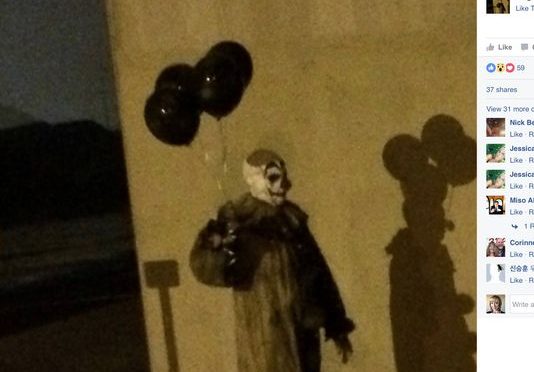 Here come the clowns! This is no laughing matter. Gone are the funny, happy clowns of yesteryear … Ronald McDonald, Bozo and Pogo. These new clowns are dark, nameless and lurk in the shadows.

Who are they? Where do they come from? Why do they prowl in the shadows carrying black ballons and evil grimaces? Who are they after? These are the questions gripping the nation as episodes of evil looking clowns initially spotted in Green Bay, WI and Columbia, SC have spread to Virginia, Florida and Colorado. With 12% of adults experiencing some form of Coulrophobia (fear of clowns), this is no laughing matter as the dark clown epidemic spreads and begins to terrorize children and adults alike.

I was able to interview Dr. Alberto C. Humadanger, an emerging scholar on the dark clown phenomena. Our exchange is below.

Question: Dr. Humadanger, who are these dark clowns?

Answer: Guardian 6, what are they may be a more appropriate answer. Man or beast, or some combination thereof. There are several theories. Some believe they are aliens just trying to fit in. Others believes they are disgruntled democratic congressman and mayors that lost their seat in congress.  Others believe they are democratic aliens that lost their elections. This I will tell you, I simply don’t know. We have not been able to secure any DNA samples.

Question: The phenomena seems to be growing. There have been dark clown sightings in three more states this week. How are these dark clowns manifesting themselves?

Answer: We have a disaster on our hands, this I will tell you. The federal government has underestimated the threat. I recommended a special task force to the Department of Homeland Security (DHS). These clowns (no pun intended) have blown me off laughing at the suggestion. They don’t get it. It starts off with one, two, three dark clowns and now we have platoons of dark clowns spreading across the country like a virus. There are bad things going on here, very bad. We better get tough.

Question: Do you have advice for people who encounter a dark clown?

Answer: I do, run like hell! Get the hell out of harm’s way. Don’t look back at them either. Don’t make eye contact with them. That would be bad, very bad. Incredibly bad. Scientists and doctors now agree that their power lies in not knowing who or what lies behind the excessive makeup, red nose and hair color. Some believe those black balloons are loaded with toxins. Don’t pop them, whatever you do, don’t pop the balloons. Chemical laced black balloons, very bad.

Question: Have you experienced one of these dark clowns? If so, can you tell us what happened?

Answer: Yes, but I don’t like to talk about it. It’s why I fear them today. This I can tell you, they smell awful, like rotten eggs. They have terrible teeth and breadth. They have super strength; this is why I lean toward the democratic alien theory in terms of what they are. Strong, these dark clowns have super human strength. Beyond scary, they make me nauseous. I was attacked by a dark clown 12 years ago. I have studied them since this attack. It was a vicious attack. I can’t talk about the details. Can’t do it. It was bad, very bad. The estimate of Coulrophobia being 12% among adults is low, very low. Look, I think it is close to 50%. After seeing one of these beasts in person, it’s 100%. It changed me, I can’t go there. I’m not the same. [Dr. Humadinger is whispering now … “I’m a changed man seeing this thing. It burns. It burns in my memory. The horror, the pain.”}

… and with that Dr. Humadinger ended the interview with a look of fear on his face. As he walked out he turned and said to me in a Pup whisper, “fear the dark clowns. Don’t take the bait. It’s worse than I thought.”

4 thoughts on “Coulrophobia & The Dark Clowns”