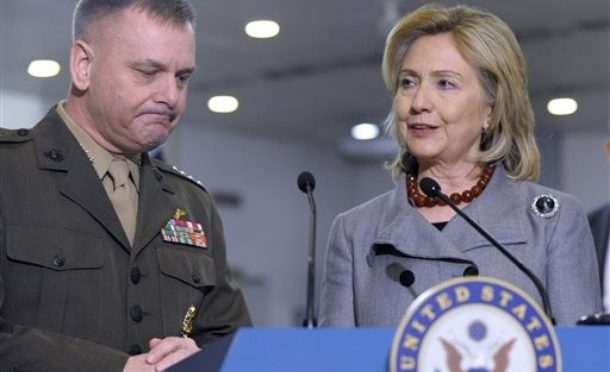 This article was originally published under the title “Cartwright & Clinton — HMMM …” on 30 January 2016.  This article is highly relevant  to how we are seeing two America’s emerge; in one America 99% of us are subject to the rule of law. In the other America, the democrat party, old media and Deep State activisits are above the law.  These three elements are the true 1%ers. Gen Flynn, one count of perjury, guilty. Clinton, thousands of highly classified documents and sensitive government emails compromised, given favorable treatment by the FBI, “extremely careless.”  Original article follows …

Dateline January 31st, 2016. Marine, warrior, a former vice chairman of the JCS has pleaded guilty to making false statements during an investigation into a leak of classified information about a covert cyberattack on Iran’s nuclear facilities. Unlike Clinton, he didn’t claim “I can’t remember.” Retired Marine Gen. James Cartwright entered the plea at a hearing Monday. When the judge asked if Cartwright understood the charge, he said, “I do, sir.” Cartwright  originally told investigators that he was not the source of classified information contained in a book published by a newspaper author, according to unsealed charging documents.

Cartwright played the Washington game never realizing he was just a 99%er, he was a pawn on the Washington checkerboard. He was expandable. He danced with the rags of the devil, the NY Times, and has now paid the price for it tarnishing his stellar career and reputation. One more highly decorated military officer to be taken down by the Obama-Clinton regime joining McCrystal, Petraeus and Flynn among others. He, like them, were not part of the protected class of democratic politicians like Hillary Clinton, the 1%er who breaks all the handling rules for classified information destroying 33,000 State Department emails on her private server set-up to avoid public scrutiny and FOIA requests. Cartwright, although achieving tremendous statue as a Four Star General Officer in the Marine Corps, one of the absolute best, did break the law. Unlike Clinton, he expects to pay a price because he knows what duty, honor, country looks, smells and feels like. Although Cartwright committed a crime, Hillary Clinton doesn’t deserve to even shine his boots.

Cartwright’s sins are 1/33,000th of Clinton’s but somehow, someway FBI Director Comey brings this one to prosecution. The law is the law, unless of course Barack Obama and Loretta Lynch instruct otherwise.

Wake up people, we are slowly being boiled in warm water and our liberty and justice is in peril.

Dateline: 5 July 2016 — Update: Sadly, we have two America’s. In one America 99% of us would have been prosecuted for violating federal law for failure to properly handle classified information and conducting government business on a personal private server. In the new transformed America ushered in by Obama, DoJ Loretta Lynch, FBI Director James Comey, and Clinton, the elites protect their own as they did today with Hillary Clinton.

(Dateline 30 January 2016) We have two America’s. In one America the 99%ers follow the law and use government computer systems and government email addresses provided. In another America the 1%ers use their private servers, private email accounts and their personal devices to do government business, expressively forbidden and against the law. In one America 99% of government employees read and abide by policies established and put in place to uphold the interests of the nation and respect the laws of the land. In another America, the 1%ers find these laws to not apply to them because they are a privileged class that we are lucky to have “leading” us. To the 1%ers it is inconvenient to abide by the laws for the public because they know better than the 99%ers and after all, these laws are for the public, not for them.

Classified information? Why should that make a difference to the 1%ers? After all, they know what is really classified and their judgment affords them the superior authority to make decisions on what is classified and what is not. The 1%ers know better than the classification authorities that have decades of experiences protecting information from our enemies and safeguarding US interests. The 1%ers may come and go in governmental political positions but who are the 99%ers in the three letter agencies that have been trained and have rich experience classifying documents and protecting means and methods to judge them?

Snowden is a 99%er, he should be prosecuted. General Petraeus, he hung around with the 1%ers but he’s really a 99%er, after all he was in the military. He was prosecuted. He at least got a plea bargain. PFC Manning, US Army, 99%er, Ft. Leavenworth (and later pardoned by President Obama because he is a protected class as a Transsexual)  preferred. CIA Director John Deutch, Clinton Administration, 1%er, brought classified information to his home and loaded it on personal computers, not prosecuted. Two America’s. 99%ers are prosecuted and go to jail for violating US policies compromising sensitive or classified information. 1%ers? The political class? The Elite? Not so much.

After seven years of the Obama Administration, we are about to find out how much of America’s Rule of Law remains intact. Can the FBI do its job without political pressure and influence? Does the rule of law apply to all Americans or just the 99%ers? Will Hillary Clinton be treated equally under the law or will there be exemptions, excuses and a fall person or two that covers the gross planned, orchestrated negligence? Will the Department of Justice follow the law? As a 99%er, it saddens me to even write that. It may be time to Occupy the DoJ. #Justice!