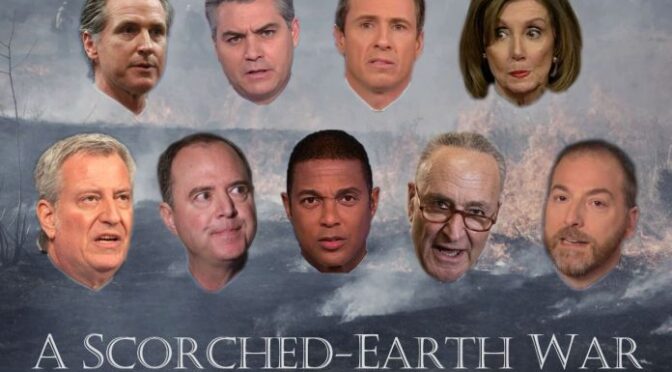 by @BlackJackPershing on Truth Social, @BlakjakPershing on GETTR, similar on other platforms.

I don’t want any messages saying ‘I’m holding my position.’ We’re not holding a goddamned thing. We’re advancing constantly and we’re not interested in holding anything except the enemy’s balls. We’re going to hold him by his balls and we’re going to kick him in the ass; twist his balls and kick the living shit out of him all the time. Our plan of operation is to advance and keep on advancing. We’re going to go through the enemy like shit through a tinhorn.

Unlike Swampian Woke General Milley who has disgraced his rank and position repeatedly, General Patton knew how to fight. He was no stranger to the concept of scorched earth and likely witnessed it during his heyday.  Used during both offensive and defensive operations, its best described as leaving nothing behind but destruction.   Its not pretty.

Scorched Earth is a term often assigned to the way General William Tecumseh Sherman handled his march to the sea through Georgia.  Proud Georgians haven’t forgotten it and many hate General Sherman to this day because of it.  Used throughout WW2 and in other wars through Vietnam, the practice was banned under the Geneva Convention in 1977, but still pops up in modern times, such as Saddam’s army setting Kuwaiti oil fields ablaze in 1991.  Now: Mauripol, Ukraine with the Russians.  But I digress.

Its time for all Patriots to go full scorched earth on leftists, metaphorically speaking.

Right now our conservative/maga/patriotic/republican army has momentum in a major way.  Victories are breaking out all around us:

By the way, don’t buy the hype that the SCOTUS decision will throw off the big red wave.  Baloney.  Simply stated, this is a leftist boomer issue – the incoming generation is widely known to be more prolife than their parents – across all parties.  Its based on science and empathy.  Hardened leftist boomers have always been the most comfortable with infanticide.  The polling on this issue is not where baby killing wackos like Liz Warren, Bernie Sanders and Hillary Clinton claim.  Its in favor of Life.  LIFE IS WINNING!!!!!  Its way overdue.

So – how do we implement scorched earth?  Digital soldiers, listen up.

We all know of the RINO tendency to seek attention in the swamp and always apologize for anything and everything that the swamp doesn’t like.  THIS STOPS NOW.  We don’t apologize ever.

Trump laid the groundwork.  Now we synchronize and accelerate.  His work primarying the weak eunuch RINOS is paying dividends.

Tell the uncomfortable truth about leftists:

These points must be our mantra.  They must be communicated by our digital army in all manner of memes, commercials, social posts and chants at sporting events.  We have momentum.  We cannot back off.  We must accelerate.

In the end what will scorched earth look like when we are done?

This is the beginning of the plan, fellow Patriots: routine loud calling out of leftist asshats for what they are.  Start now.  Don’t hold back.  Tell others.  Do it.