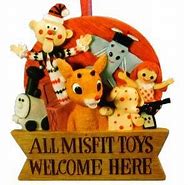 Once again 53rd Nation, it’s time to do our Christmas shopping and line up those absolutely perfect gifts for the denizens of the Swamp, and other liberal enclaves across the land.  Let’s jump right in and help Santa make some selections, despite the fact that they’ve all been naughty:

Nancy Pelosi: Nancy gets a Crumbcake so she can have some of her crumbs back.  We also throw in a free visit to the botox emporium of her choice so she can continue to look good while POTUS administers his regular beat downs to her.

Cryin’ Chuck Schumer: Chuck – this year you get a nice package of adult diapers, which you likely needed as you left that oval office beat down the other day.  2019 will bring you many mean POTUS tweets and head punches.  Better get the diapers on regularly.

Jeff Flake: Jeff, now that you have time, the 53rd Nation is going to buy you a nose job.  Get that thing fixed for the love of humanity.  You will also receive some free career counseling to help you in your new gig as a commentator for the Very Fake News – which you’ve been auditioning for the last 2 years.

Mitt Romney: Mitt will get a football helmet.  It’s only a matter of time before POTUS starts to clobber him for the many dopey statements he will make to enshrine himself in the middle of the road – where you find only dead skunks and armadillos – and Mitt.

John Brennan: a new set of pajamas – the ones with footsies sewed on and the trap door on the back.  When he’s not yelling on MSNBC or erupting with irrational anger in his tweets, he will need to stay in bed and eat his mush.  The jammies will make that more comfy for crazy gampy JohnnyB.

Joy Bejar: we gotta do Joy a favor and get her a muzzle.  Sometimes our loyal dogs are unfriendly to strangers and it’s the only way to prevent unfortunate accidents.  Ruff!

Babs Streisand: Babs doesn’t bring us flowers – or talent  – anymore.  Only mean bitter hack tweets about our president.  We’ll get Babs a rocking chair and some knitting needles to keep her busy while she reflects on the old days.

Maxine Waters: what Mad Max needs is a civics course and a new set of wigs  – we got ya Max.

Alexandria Ocasio-Cortez: This young person also needs a civics course.  We like her foolish nonsense though, so instead of civics, we will sign her up for some yoga and wine tasting classes to help keep her in #BigDummy status for as long as possible.

Stephen King: talented writer but Stalinist leftist Stephen King gets a free relocation to Cuba or Venezuela – his choice.  He can take formless Human Blob Michael Moore and insane knucklehead Sean Penn with him.

Bill Kristol: what do you get for the washed up neo-con know it all that seems to tweet angrily at POTUS all day long?  Sad bitter lonely hack Bill needs serious therapy.  For starters we send him Jordan Peterson’s Twelve Rules for Life with the suggestion that he start reading the chapter on Rule 9: Assume the person you’re listening to might know something you don’t.  Try it Uncle Bill.

John Kasich: chronic bad eater and complainer John gets a bib for starters, to help him when he eats slices of pizza from the wrong end with overly large bites.  We do not expect him to change this disgusting habit so we will provide the means to help keep things tidy.  We will also throw in some wet wipes.

Claire McCaskill: Claire gets a hearty thank you for clearing the deck for a Trump backed conservative in the 2nd MO senate seat.  Also – her choice of a free all you can eat serving of Ted Drewes Custard, Pappy’s BBQ, Toasted Ravioli, Gooey Butter Cake or other high calorie MO delicacy of her choice.  Nom Nom Nom Claire.

Don Lemon: Buffoon and CNN mouthpiece Don gets a propeller beanie to wear while he routinely soils himself on national TV.  It will be a good look and definite upgrade.

Jim Acosta: mouthy white house press room toddler gets a time out and no dessert and a lump of coal from 53rd Nation.  May qualify for #Bonehead of the year.

Dan Rather: irrelevant Dan keeps weighing in on POTUS from the deep dark cellar he dwells in.  We give Dan a box set of old 60 Minutes DVD’s he can watch to revel in the times he was relevant.  Poor Dan.  We’d still #RatherNot

Have I missed a gift opportunity?  Please share your thoughts in the comments   section.