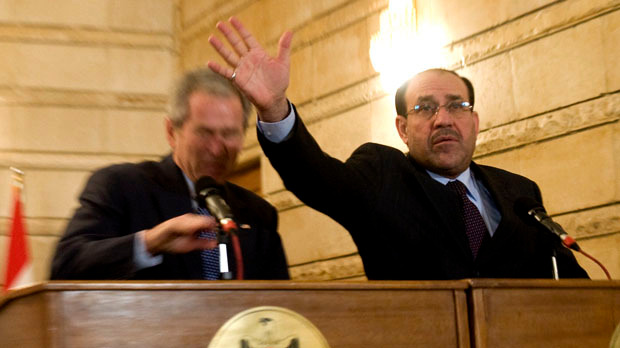 That’s right W, and for that we are thankful.

As W has inserted himself in the national conversation of late, so let’s recap where many of us have landed on the teetotaling son of another President with a dubious record.

We wanted him to succeed.  In fact in the immediate wake of 9/11 even many democrats felt reassured that ‘the adults were in charge’ following 2 terms of Bill, Hill, Monica, White Water, Clintoncide, Hillary Care, Co-presidents, Vast Right Wing Conspiracies, a failed impeachment and the generally tawdry atmosphere of the Clinton Whitehouse.

Americans wanted ass kicked after 9/11.  W delivered.  Box checked.  However,  I believe it was Colin Powell at the time who said with regard to screwing up a war, ‘If you break it, you bought it.’  Did we ever.  Powell deserves to be held accountable for letting Rumsfeld drop his ‘Powell Doctrine’, built on lessons learned from Vietnam on how to win wars.  Powell’s doctrine was used in the first Gulf War: overwhelming force.  It worked.  See the ‘highway of death’.  He let Rummy screw it all up in the 2nd Gulf War.  An unending disaster ensued.

But we digress, back to W.

We thought we got a republican Harry Truman.  Instead we got a less demented, sometimes confused and togue tied republican Joe Biden.  As George H.W. might have said: ‘Not good!  Bad!’

We thought we got a more conservative George HW, less enthralled with the New World Order.  Instead we got China sellout 2.0, post Clinton, letting the offshoring spread like a plague while telling Americans we weren’t competitive.  Blaming us while giving our jobs to communists paying 1 cent on the dollar to their slave laborers.

We thought we got a happy warrior – the one that unseated loudmouth Ann Richards in TX.   Instead we got an oddly passive mopey W who refused to answer his critics, who in turn just piled on.  This passivity let down his voters and his party, and enabled the attack mob CCP-partner media we now have firmly in place.

We thought we got a down home, red neck, rootin tootin, kinda funny, ranch owning, pick up truck driving old son of a gun character as President.  What we really got was a Yale educated elitist faking it as a cowboy.

“The thing that’s important for me is to remember what’s the most important thing.”
― George W. Bush

W lucked out with stiff retreads to campaign against.  Gore and Kerry – unappealing scolds that allowed W’s charm, such as it was, to shine.  He was very likeable – we must give him that.

And funny at times: It’s a shame he only gave mean nick names only to his immediate staff: Skippy to Cheney due to his heart issues.  Turd Blossom to Karl Rove for obvious reasons.  Tiny to Richard Armitage, chubby Deputy Secretary of State.   It took a fearless champion to give nicknames to the dummies that truly deserved them in the media, democrat party etc: Donald J Trump.  His were better.

W’s largest mistakes were his foreign wars.  We have plenty of recent history that showed how to lose foreign wars: Vietnam with no clear strategy, incrementalism, and little home support.  And how to win: first Gulf War: Clear goal, Powell doctrine of overwhelming force.  Having some military background himself, W should have been wiser.  Rumsfeld, seemingly a good choice at first, turned out to be the worst of the worst technocrat.  Shock and Awe didn’t prevent us from an unmanageable mess in Iraq upon our march into Baghdad.  Such lousy execution from pedantic bigmouth Rumsfeld should have got him fired.

Remember the disappearance/retirement of General Shinseki after he told the truth about necessary troop levels needed to occupy Baghdad?  Shameful.

W’s biggest mistakes involved listening to career bureaucrats (the swamp) and taking them at their word.  The ‘de-Bathification’ of Iraq was a disaster.  Others can cover that topic better than I can.

The so called surge was late.  And necessary due to bungled strategy and poor execution.

Interesting that most of the career military officers, especially the General Officers, that have criticized Trump publicly, were key leaders in the failed foreign wars started by W.  Clearly their motivation is fear of their malfeasance being exposed, and resentment of Trump’s accurate criticism.

The ineptitude of Iraq/Afghanistan wars is settled business.  I believe the intention was to get to root causes in the region and permanently settle them.  Clearly that did not happen.  Let’s move on.

Remember when W fired Rummy in 2006, openly admitting it was because he lost congress and they (the Dems) wanted someone less controversial.  I am not Rummy fan, but really?  What kind of reasoning is that?  Fire him and take responsibility for it.  Sad.

Remember when Bush cut taxes and it really wasn’t even that much and he let the business tax stand which really was the big issue even then?

This all seems like a million years ago.  Pre-tech monopolies and censorship.  It is actually a bit hazy.  Like many, W did some good things.  But they were lost under a pile of incompetence.

“They misunderestimated me.”
― George W. Bush

Remember the embrace of globalism and so called free trade with W, a stupid republican hallmark for decades.  The problem is free trade was never free or fair.  But the Chamber of Commerce loved it as they lined their pockets while American workers got screwed.  ‘Compassionate Conservative’ W was ok with that.

Remember when W said he wouldn’t comment on his successor due to the dignity of the office, and proceeded to let Obama blame him for every bad condition that has ever existed without a word?  And remember when Trump made mincemeat of his dopey brother Jeb, W decided to join the chorus of A-holes taking shots at Trump?  Yeah.   I do.  Shove it W.

The other things are many: bailouts, Hurricane Katrina optics and execution, whatever.  Massive media misinformation had become a thing.  W is a classic example of missed opportunities, unmet expectations, investment in failed models, faith in the swamp, disguised elitism, groupthink, failed strategy setting, unwillingness to change quickly when things are not working.  Stubbornness.   We wanted him to win but he didn’t let himself.  He tried to act like the common man, but helped give birth to the forgotten man (and woman).

Finally, I’ll say it as much as it pains me.  On 9/11 when W sat there as long as he did after Andy Card told him we were under attack, and let the kids keep reading, it did suck and was embarrassing.  It pissed me off when Media Hippopotamus Michael Moore made hay with it, but on that, he was right.  Nuts.  W may have needed time to think, but he could have done that in private.  Gracefully exiting quickly was the thing to do.  WTF.

“It will take time to restore chaos”
― George W. Bush

W – you had a good life as TX governor and part owner of the Rangers.  You should have stayed.

4 thoughts on “Confessions of a Reformed and Redeemed W Voter”