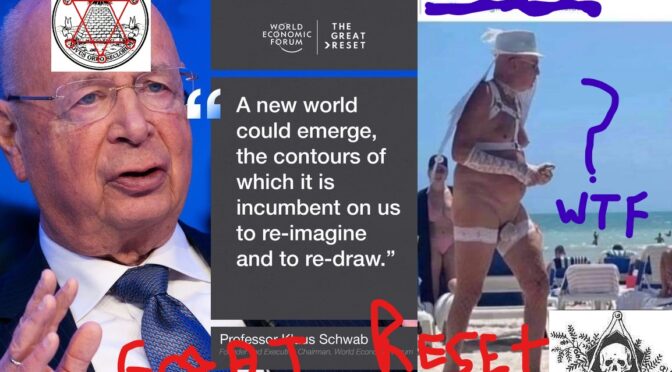 (And This Naked NAZI Has No Clothes!!!)

“You’ll own nothing — and you’ll be happy about it.” Klaus Schwab

This my friends is one Klaus Schwab. He represents the “Masters Of Our Universe”!  And just to prove that he has nothing to hide? He has chosen to share the image of his glorious naked visage with us. At 84 years old, he struts the beaches of Europe wearing only some lace sleeves for his arms and legs and oh yes, let’s not forget his lace “Penis Sleeve”! You may need to get out your long forgotten magnifying glass to identify that lacey frill being used as a “cover up” for his dainty manhood.

By now you may be asking yourself, “Who is this guy and why should I care?” Great questions! Here are the answers. Klaus and his filthy rich buddies run an organization known as the World Economic Forum. They meet annually in Davos, Switzerland. The purpose of their organization is to organize and enforce “The Great Reset”. They believe that “A Globalized World is best managed by a self-selected coalition of multinational corporations, governments and civil society organizations.” Weellll, what could be wrong with that you ask?

A look at the list of invited guests might give one pause for alarm. Such notables as Anthony Fauci, Bill Gates, Emmanuel Macron, Angela Merkel, Prince Charles, & Al Gore are regulars and they represent just the tip of the spear. Add to the list some of the globe’s most powerful money men such as Lawrence Fink, CEO of the Blackstone Group, which holds the world’s greatest concentration of stocks, bonds, investments and our 401k funds. This is a serious group of people focused on becoming more powerful and growing their fortunes as they do so. In so doing, our Great American Middle Class is eliminated and with it our ability to elect our own leaders. Our freedoms are then controlled by a faceless council of self-appointed wealthy “Douche Lords” who know what is best for us.

What is it about the rich and powerful that drives them to wanting even more wealth and power? And like our own “American Elites” why are the vast majority of them elderly? For all of their wealth and power, why can’t any of them look in the mirror and actually see themselves for what they are? Do they really think that “just a little bit more” will buy them a new body, better health, or a way out of hell???

Like George Soros, Klaus has an heir waiting in the wings to become the next Chief Executive of the WEF. His son, Olivier Schwab, has a Chinese Wife who heads the WEF Office in Beijing. “How Convenient!!!” as the Church Lady used to say!

In addition, Klaus has a daughter named Nicole Schwab. Nicole manages the Gender Equality Project for the WEF. Wow! What are the chances? Seems to me that there is allot of collusion between our own Socialists……ehrrr……..I mean Democrats and the WEF.

Klaus and his buddies in the World Economic Forum believe that “excessively high salaries” are no longer socially acceptable (unless of course you have the good fortune of being an active member of their little club). There again, it would seem that there are some parallels that are shared with our American Socialists …..ehrrr…..Marxists…..ehrrr…..Communists…..ehrrr…..Democrats!!!

Well, power and greed are one thing. I suppose that we can all be thankful for one thing! And what is that you ask? That is unlike Klaus running nude on the beaches of Europe, our own American Elites have spared us, at least thus far, from the images that the paparazzi could inflict upon us. To date, I have not seen nor do I want to see the following:

Adam Schiff: jogging nude through the former NBC studios in Burbank, CA wearing nothing but brass rings around his pencil neck as he continues to extend the distance between his big head and “little head”! (There is no truth to the rumor that he is an actual “DickHead”!

Jerry “Nads” Nadler (Brooklyn’s Best): waddling naked through Coney Island to grab some Nathan’s Famous weiners……and no! We don’t mean a guy named Nathan. Nads likes to think that his manhood compares favorably to Nathan’s entrée, however, Nads hasn’t seen his weiner in decades! Its hiding under his 3rd roll of blubber!

Chuck Schumer: skipping in his birthday suit through the 5 boroughs of NYC is search of every TV camera that he can find.  Chuckie wants to show the world how he came by the nickname “Schmuckie” (aka “Putz”).

So let us all be thankful for the God Given Gifts of Freedom and Liberty that we currently enjoy but let us also stand guard for those who would take it from us and insert their own perverted visions upon us!

2 thoughts on “The Great Reset Engineered by World Economic Forum”