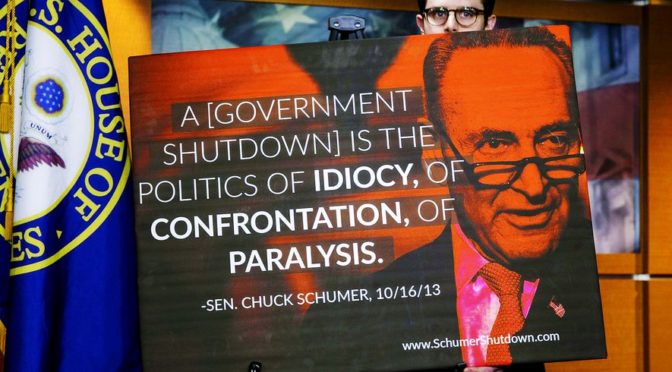 Senator Schumer has parked the Clown Car on the democratic side of the Senate parking garage and he has graciously de-linked DACA from a continuing resolution to fund the federal government. So, in other words, we are where President Trump was three days ago. We ¬Ýhave a miracle only hours ago, a bill passed to keep the government open. The #SchumerShutdown nightmare is over.

With key advisors like Sen. Dick Durbin, Sen. Tim Kaine and Sen. Bernie Sanders, who needs friends?! Wow, the Clown Car occupants are scattering like roaches hit by light in the middle of the night. They have moved under the appliances known as CNN and MSNBC to provide cover and fake news!

Deferred Action for Childhood Arrivals (DACA), 800 thousand of them whom arrived illegally, are being prioritized by Democrats over the rights of 320 million tax paying American citizens . Even though the current illegal DACA arrangement implemented by an illegal Executive Order by former President Obama is not due to expire until March 5th, 2018, the Democrats (#SchumerShutdown) are NOT willing to pass a continuous resolution to fund the government.

Let us know if you liked the post. That‚Äôs the only way we can improve.
Share your vote!