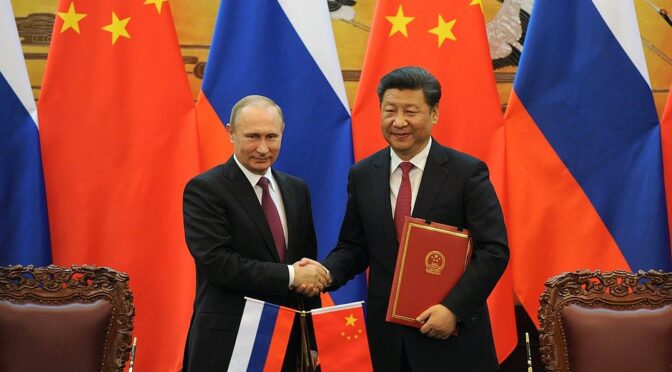 By BlackJack Pershing  @BlakjakPershing on GETTR
Dateline 24 January 2022     1800 hours
While the world watches #SleepyJoe fumble everything that Russia throws at him and assumes the unfolding Ukrainian debacle is all about Putin overpowering Joe and Feckless Europe in 3 level chess, its not hard to step back and see China’s malevolent hand in the mix.
‘The supreme art of war is to subdue the enemy without fighting…’
‘In the midst of chaos, there is also opportunity.’
Sun Tsu, From the Art of War
China has great interest in the distraction of the United States.  Already saddled with the worst Commander in Chief in history, loading up the US with an unwanted war with its traditional Cold War adversary would be quite advantageous for China.
Whether Russia is pursuing its present course with or without Chinese consent is an open question, but we do know both have been cooperating more of late and both have much to gain with a weak, aimless, self hating United States.
Smart money says that China is encouraging the Russians behind the scenes.
What is Ukraine to China?  Simple a pawn.
Did you know that Ukraine has been pursuing being part of the so called ‘Belt and Road’ initiative that Beijing is pushing all over the planet?  If there is a war, one could argue that China gets to build out even more wrecked infrastructure and benefits from leveraging loans and assistance to Ukraine.
Ukraine knows that Biden can’t be trusted.  He’s screwed them before by withholding aid, demanding resignations of key officials and saddling them with his crackhead son as an advisor.  Could that have driven them to China?
Also – China has been selling weapons to Ukraine for a number of years.  Diabolical?  They benefit from both the war and from reconstruction.  How nice.
And while the US is distracted with war, we continue to lose on trade, on self imposed energy scarcity and our best technology being siphoned from US businesses with operations in China.   Willing idiots in US corporations are corrupted easily with cash.  Witness the NBA.
The big prize for China as we get bogged down in a protracted Ukrainian conflict?  Taiwan.  That reason alone makes it highly likely that Russian and China already have an agreement.  After Taiwan?
Who is at the chess table with Russia?  Biden and Blinken.  And the Euro-dummies.
Feeling good?
Stakes are at an all time high.
Good time for Iran to make a move?
We sure could use some mean tweets right about now.
BJP

One thought on “Xi’s Ukrainian Diversion”