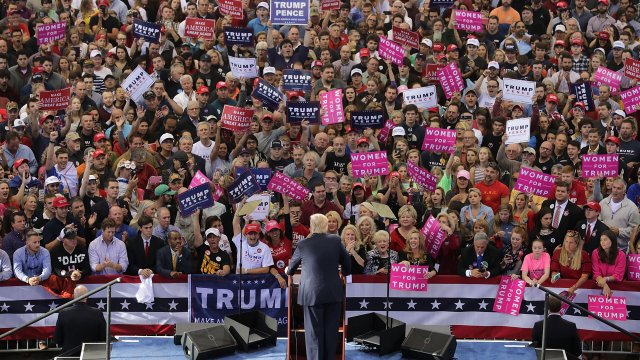 By BlackJack Pershiing
@pershingsoldier on Twitter and Parler
Dateline 301558 August 2020                       Missouri Territory
“…they are in a terminal panic in Washington.  They are frightened.  They hear the shouts of the peasants from over the hill.  And they’re comin’! They are comin’ with pitchforks after them!”
Pat Buchanan, 1996
In the end, Pat didn’t get it done.  His insurrection fell flat.  Maybe Pat enjoyed being a smart ass more than sealing the deal.
However.
A billionaire who didn’t need the job secured the presidency with the very peasants Pat spoke of, albeit with a new name – the deplorables.  Four years on, it is happening again with a more diverse and unlikely band of deplorables.  In fact you might call in a Grand Coalition.
Unlike the source of the term, the parliaments of Europe, with multiparty factions that are sometimes sewn together, our Grand Coalition is a coalition of like minded patriots from many divergent groups, parties, races and creeds.  A coalition of those willing to save the republic.
Who makes up the 2020 Grand Coalition for Trump?
The Forgotten Men and Women: after being sold out by the Bidens, the Obamas, the Bushes and the Clintons, the forgotten rose up.  Many of them with careers cut short as the multinationals they worked for sent their jobs to China and elsewhere.  They knew first hand the casual and dismissive way that they were betrayed.  “Barack Obama, who was and still is very demonic, made anyone who had turned 50 during his administration feel marginalized and discriminated against.” Says a Michigan resident, veteran of the auto industry, and patriot.  You can find her at @Irishyouwell on Twitter.  She hails from a large Irish Catholic family and went for Trump before her republican brothers got there.  She knew and was one of many early adopters.
Republican Voters, many cautious at first: We just didn’t quite know how it would turn out.  Trump admitted he donated to both sides as a business man, had friendly relationships with many democrats, and was known for many other controversies.  Many nervously gave him their vote, because of the malevolence of Hillary.  The outcomes are incontrovertible.  SCOTUS picks, tax cuts, regulatory changes, etc – see the 53rd’s Endorsement of President Trump for more.  We’ve got ourselves Reagan 2.0, modernized to deal with the swamp and the MSM Mudpit.
Black Americans in increasing numbers: #BLEXIT is real.  Ask Leo Terrell aka Leo 2.0, who was sent over to the republican side by the violence and unrest engineered by the Pelosi/Soros/DNC cabal.  At one time this was a small but powerful movement – it is gaining strength, size and momentum as Black Americans rediscover who really freed the slaves and stood for freedom throughout our history: The GOP. We are at the tip of the iceberg this year and the real % of the black vote that goes to the GOP is up for grabs.  This writer asserts minimum 20% with a strong upside possibility.  Trump’s record is clear from the substantial (HBCU support, Prison Reform) to the Inspirational (pardons for Alice Johnson, Jon Ponder) despite MSM efforts to hide it.
Latinos: that’s right, Latinos.  Here is a real quote from a friend of the writer, a Mexican Immigrant (Legal!) and entrepreneur on why he will be voting Trump: “Law & order, Anti-Abortion, Huge Balls and Jobs! and in addition, the wall. I know who comes across the border with and without the help of Coyotes.  Trump was right on this from the beginning and it will help those on both sides of the border be safer.  Finally – he’s helping people get out of prison who maybe were unfairly sentenced.”  You can find him, ‘Very Bad Hombre’ on Twitter at @JoelOro71571807
Boaters: who knew that boat parades were a thing?  They are now.  #KAG2020LandslideVictory
Cubans, Asians, Vietnamese, others escaping socialist/communist hellscapes: Maximo Alvarez, Cuban born business man and speaker at the GOP convention said it best: “I am so grateful to America, the place where I was able to build my American dream through hard work and determination…President Trump knows that the American story was written by people just like you and I, who love our country and take risks to build a future for our families and neighbors. I may be Cuban born, but I am 100-percent American. This is the greatest country in the world. I said this before. I gave away everything I have today, it would not equal 1 percent of what I was given when I came to this great country of ours: The gift of freedom.”
Factory Workers: having run successful businesses and having been raised walking construction sites, Donald Trump has an affinity for workers of all kinds.  He relates.  The term ‘blue collar billionaire’ is legit. Here’s how Joe Biden relates to them:

“This is not OK, alright?” the man said, to which Biden replied, “Don’t tell me that, pal, or I’m going to go outside with you, man.”

“You’re working for me, man!” the worker said.

That is real exchange between Biden and Jerry Wayne, auto worker from Detroit.  That says enough.  In addition to sending their jobs to China, he doesn’t even respect them personally.  Even when he’s not in the basement, Joe basically sucks.

Freedom Caucus Republicans: it has been a long and painful process but they finally get it.  Many of these types of republicans are well intended and worry about deficits and other matters of principle.  They have netted out in favor of the little guy and now help the President move his agenda.
Grandparents and parents of snowflakes and other assorted dead-enders, malcontents and under-achievers: every time they hear the words “Go home to Mommy!  and she’s voting for Trump!” – they know the Commander in Chief understands their predicament.
Legitimate Democrats, abandoned by the DNC: unreported by the media, 30% of DNC delegates voted against the radical platform of  the party, as espoused by the Squad.  It is easy to infer that upwards of 30% of all democrats are not in favor of the party’s current direction and many of them will vote for Trump out of sense of Patriotism. All of them? no.  But like Black Americans, many will have their ‘red pill’ moment and vote GOP to save the republic.
Gay Americans: ask Brandon Straka who leads the #WalkAway movement.  Some of the gay community is smart enough to know that the Biden/Obama admin let into our country millions of unscreened/unvetted Islamists that believe they should be thrown off buildings.  Many are arming themselves and embracing safety, liberty, freedom and independence over woke/fascist social politics that never end.  Another group that has discovered they are useful pawns for the democrat hate machine.
Never Trumpers, the smart ones: they exist in shrinking numbers: a type of Rockefeller republican worried more about their portfolio than any notions of liberty or freedom.  They have liberal friends and their social standing in urban settings is of utmost importance.  They nod in agreement when points are made about Trump’s boorish behavior.  Many – as many as half – will secretly vote for him due to the excellent returns on their portfolios both before and now after, the pandemic first appeared.  (Related: check out Glen Beck’s recent apology to the Trump family on twitter)  One thing this crowd may be starting to realize is that ‘free trade’ never was.  We opened ourselves up to be raped and pillaged by allies and adversaries alike.  Perhaps they are waking up.
People of Faith: Christians of all stripes have embraced the President – not due to his personal past, but because of his stalwart commitment to religious freedom and life.  He has delivered and is the most pro-life, or pro-afterlife as Sister Deirdre Byrne might say, President in our history.  Jews should be increasingly in the President’s camp – at least the ones who care in the slightest way about their faith and Israel.  We will see in November if they join the Grand Coalition.
Democrat Mayors, the ones that are not dumb: they are starting to emerge and support the president in the open – see Minnesota – 5 democrats and 1 independent have come out in support of the President for the difference he has made in their iron ore mining region.  More to come.
Bikers, Truckers, Lobstermen, Fishermen, Loggers, Steelworkers, Oil Workers: all had their lives and incomes improve under Donald Trump – in most cases by him undoing executive actions from previous administrations that were arbitrary and unfair, and driven by special interests/lobbyists.
Veterans and active duty troops: We know that Trump has fully funded the military for the first time in decades to include pay raises.  We know the VA has gone through it’s first real reform in decades.  ISIS is gone.  Troops will be redeployed or come home from stagnant areas where there are no results.  We know our dead were returned form North Korea.  We know POTUS is not the unstable war monger the MSM painted him as.   He has our backs and does not set troops up for failure
The Digital Army: Trump has unleashed millions of patriots that help win the war against SleepyCreepy Joe and his Woke Dopes every single day: some you may want to follow and check out in addition to yours truly, @PershingSoldier, are: @Irishuwell @thro_e  @PhilosophySeel @The53rdRegiment @abodon_5  @Svitoslav3  @PhillipDenton  @SunshineLK10 @SmithsCoffeepot  @cinco_d_mayo  @DrRick32855962  @Red_Pilled_Day @eyeofseeing  @patriot45Lynn  @groth1945  @CrazyCatRescuer @BardakOrama  @ArmyVet2x @usmc_army
These folks and many others keep it real, keep it funny, and keep it compelling.  Check them out!
We close with a bit more from Michigan resident, @irishyouwell :
“One of the most charming – yes charming! – characteristics of President Trump is his love of the nickname!  He had me at ‘Bad Eater,’ for fake conservative and 24/7 sour puss, John Kasich.  I have always been a ‘nicknamer!’  And having my parents and both sets of grandparents being native New Yorkers sealed the deal – an instant bond!”
I have to admit I agree wholeheartedly with that assessment.
Welcome to the Grand Coalition!
BJP