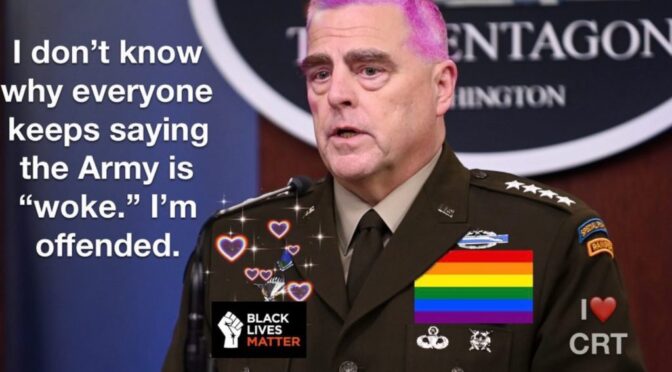 ‘Fat, drunk and stupid is no way to go through life, son’

To paraphrase the Dean, ‘fat, scared, stupid and woke is no way to go through a military career, General Milley!’

‘There’s no power in a bushel of blubber’

Its about time we discuss the state of many, but not all General Officers in recent years, especially the ones choosing to bad mouth our legitimate Commander in Chief, Donald J Trump.

A bit of history first.  We haven’t solidly and specifically won a war since 1991.  The Gulf War was a stellar use of strategy, tactics and restraint.  Bravo.  This war used what was known as the ‘Powell Doctrine’ a set of lessons learned from Vietnam about the need for clear goals and the use of overwhelming force for clean victories.

One could argue that ’91 was the year we could say that the Cold War was also won after years of commitment and leadership by many in several generations of political and military leadership – it was even mostly a bi-partisan effort until the 1980’s.

Since ’91 however, whether it was Clinton’s draw down of the military in the so called ‘peace dividend’, or the two wars poorly fought under the supervision of George W Bush and Barack Obama, our military leaders have let us and our soldiers, airmen and marines down.

There have been moments of brilliance.  Battles have been won by the rank and file, by junior and midlevel officers and NCO’s.  But at the strategic leadership level, we have been let down.  There have been legitimate small engagements like Panama or Kosovo that were positive.  Missions like the one in Haiti that achieved good humanitarian aims for a time.

But the big jobs have been bungled by Generals.  The list of the incompetent GO’s is long.

Many veterans know that once you get to the rank of O-6, or full Colonel in the Army, Airforce and Marines or Captain in the Navy, all future promotions are purely political.

‘Anyone who thinks he’s indispensable, ain’t!’

We haven’t seen many, if any, principled resignations at the General Officer level in the last 20 years.  We can only imagine there have been plenty of opportunities.  We would hope that our senior military officers would have the moral courage to walk away from poor civilian leadership.  We need to be able to count on that.  But that  apparently doesn’t happen despite many opportunities: Understaffing the invasion force of Iraq? Performing social experimentation in the ranks of our troops?  Requiring pseudo-socialist training that has zero to do with war fighting? Summary cuts to critical budgets for training? Requiring trans persons to be part of a force that still disallows people with flat feet and other musculoskeletal issues due to the need for readiness?  Announcing an Iraq departure that gives birth to the Caliphate? These weren’t enough to cause principled resignations?  Not even a public negative comment?

We have a cohort of General Officers who have delivered a generation of lost wars, who act as if they deserve respect and admiration but really deserve the opposite.

We have a cohort of General Officers who show open bias politically. But here is the official guidance from the department of defense:

These cowardly GO’s would gladly prosecute junior officers, NCO’s and troops under the UCMJ for doing far less than they have done, in terms of their cooperation with the foul aims of the democrat party and their attempts to undermine the Trump administration in the roll out of its policies.

Think of SecDef Mattis and his open contempt of his boss.  Well General Mattis, he was only trying to change things because of your record of failure.

Think of egg heads like General Michael Hayden, a Four Star General who also served as Head Spook at the CIA for a number of years.  This arrogant Swampian has screeched out regularly about President Trump, bringing dishonor on himself and his rank.  The likely reason is because of what Trump knows of the General’s failures and malfeasance.

Think of poor General McChrystal, dissed by Obama after doing a pretty good job, because of leaked comments to press scumbags he should have never associated with.  Apparently a life long learner like Stan didn’t learn a key lesson and went back to supporting democrat dopes and openly bad mouthing President Trump on Syria tactics during his term.  Trump was right.  Again.  Stan’s motives remain unclear as he’s been openly dissed by Dems for years.  Just dumb I guess.

Think of lost at Sea Admiral McRaven of ‘Make Your Bed’ fame, another sad sack openly bad mouthing President Trump for any number of reasons.  Guys like him can’t handle unconventional leaders like Trump.  Thank God the founders ‘got it’ and understood our system would produce a variety of leaders, some colorful.  Swampian stiffs like McRaven obsess on ‘he said mean things’ while losing wars and acting cocky.

Think of Woke Fatty, Mark Milley, Chairman of the Joint Chiefs who was savagely and appropriately corrected publicly by the President in a statement on the day of this writing for musing to the press about Trumps desires for a coup.  Trump hires him, gives him a chance after others dissed him, and Milley returns the favor by kissing woke democrat arse.  A sad mess, a disgrace to the uniform – especially because his ability to pass an Army Physical Fitness Test isn’t even in the remotest of possibilities.

Let’s pause here and ask the question: what happened and when did it happen that fat slobs are now a thing in my United States Army?  Vindman?  Milley?  This needs to stop.  Navy?  OK – they are desk jockeys primarily and there is a tradition of out of shape Navy Officers that goes back to the founding.  We can even let certain Airforce Officers be tubby.  But the Army?  NO.  JUST.  NO.  We’re not having it.  Drop the donuts General and get your fat arse on the track.  Of note: the correlation between being fat/slovenly and being liberal/woke is extremely high.  Someone needs to check on Hayden – likely has a major paunch developing – and cankles.

You may have also seen that Admiral Michael Gilday, Chief of Naval Ops, has added anti-American socialist garbage to Navy reading lists.  What about winning wars, one may ask?  What about the Navy enduring a number of embarrassing accidents and incidents in the last 15 years, one may ask?  Perhaps its leadership devoid of principle or common sense?  Obsessed with democrat arse kissing instead of winning?

Notice the Patton quotes?  What do you think he’d make of this sad crop of Generals?  Not much is my guess.  We quote him because he and men like Sherman, Grant, Pershing and Washington knew their jobs were to train our troops to do difficult, hard things in the worst of circumstances.  And to win.  Where did we go wrong?  Who derailed this tradition?

“War is cruelty. You can’t refine it.”
― William T. Sherman

Here is some free advice for our senior military leaders, which they should already know, but apparently don’t:

This one time active duty soldier has just about had it with today’s military leadership.