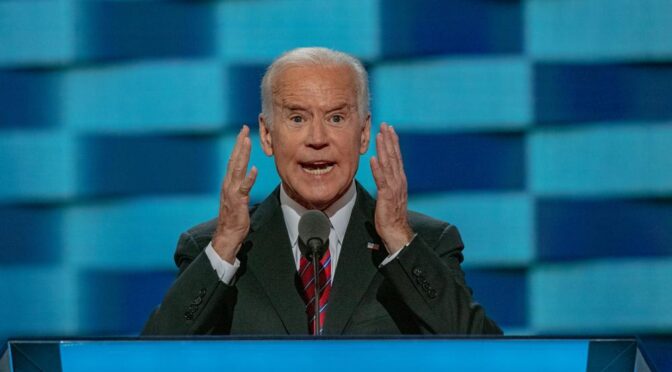 Many of us are watching in dismay. It’s hard to believe this guy was really elected President of the United States. Tens of millions of Americans still believe he wasn’t. His behavior reinforces that view.  He struggles to complete thoughts and read sentences. He looks and is feeble. He’s being managed by people in and outside the Whitehouse instead of leading. The  progressive policies he has “adopted” are destroying America. I use the word “adopted” because it is clear he is unfit and likely is incapable of truly understanding bills and Executive Orders he is signing. Unlike his predecessor, he is not a fit stable genius. As we watch this car wreck in slow motion, Americans are feeling more and more helpless; more and more disconnected; and more and more shocked at how quickly we are losing our freedoms.

Biden’s southern no border strategy is nothing less then senseless. Trump secured our southern border, worked with Central American countries to stop illegal immigration and built nearly 500 miles of a modern secure wall. Biden’s policy is to let everyone in, put children in tents and fuel illegal immigration through inaction and stifling Border Patrol through policies that prevent them from doing their job. He has done all this during a pandemic where illegal aliens are bringing the disease with them, getting on buses once released and now  spreading the China virus throughout the country. Biden’s border policy is an unabated super spreader event to remake America by building a dependent population and undermining the legal immigration system.

America’s schools in blue states largely remain closed. Biden has doubled downed with the Teacher’s Union ignoring the needs of children and their families. Kids are being treated like pawns in the Democratic Party’s playbook while Dem teachers and their unions take the big payoff from the insane $1.9 Trillion dollar No COVID bill that just passed with ZERO Republican support. We have a government of elites for elites. We no longer have a government by and for the people.

Next up is HR1 set to destroy the American election system once and for all. Among the garbage in this bill is to allow votes to continue to be counted 10 days after the election is over. In other words, how many more votes does the democratic candidate need to win. Sound familiar? This was a Democratic Party best practice in Pennsylvania, Georgia, Arizona, Wisconsin and Nevada in the 2020 Presidential Election that gave us Biden. Of course mail voting without signature verification is now the norm as well. This bill destroys the integrity of our elections once and for all and Biden is excited to sign this trash into law. Once again, ZERO Republican votes, not even the RINOs voted for this.

While Wall Street is currently drunk in unchecked government spending flooding the system, eventually inflation is going to roar like never before. Get ready for Carter’s Misery Index to return on steroids except this time it will be Biden’s Beltway Blunder that tanks America’s economy and takes millions of job with it. Biden has already killed ten thousand good paying jobs associated with the Keystone pipeline. Biden’s executive order ceased work on the pipeline, has driven up fuel prices by forty cents per gallon and returns  America to energy dependence. This is what Biden’s 50 years in government gives Americans; a clueless, ancient economic neophyte that managed to enrich himself and his family while putting America last.

I won’t even get started on China in this piece. We’ll save that for another day as Biden begins to roll back Trump’s China successes that will undermine American business and national security.

Biden’s America. At the moment, we all feel helpless. Even the Whitehouse has been turned into a fortified Forward Operating Base (FOB) in Washington DC. FOB Biden.Sad.