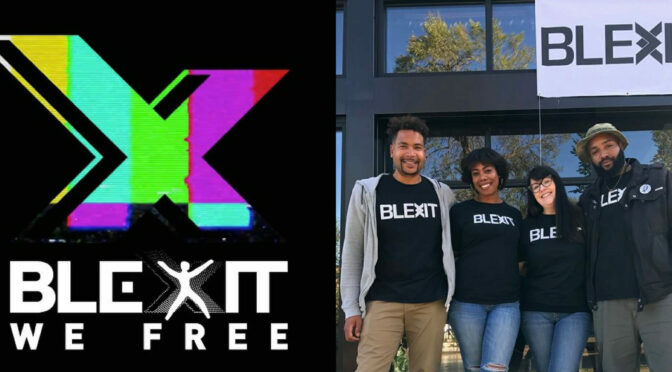 ‘You have the ability to choose which way you want to go. You have to believe great things are going to happen in your life. Do everything you can – prepare, pray and achieve – to make it happen.’
—  Ben Carson

It is estimated that between 1820 and 1920 as much as 50% of the population of Ireland emigrated to the United States. To this day one can visit abandoned villages in Ireland, many of them vacated during and after the great potato famine. While today we speak of ‘Brexit’ as the Brits finally get their act together and give themselves breathing room from the continent, we should remember the Irish may have been the first to really depart Europe in a major way. They had enough.

Today, on Martin Luther King Day, let’s reflect on what’s come to be known as ‘Blexit’: the mass exodus of many African Americans from the Democrat party.

The first sign of Blexit: we woke to the election of Donald Trump in November of ’16 to a viral video of Henry Davis, a black Trump supporter from inner city St Louis, laughing joyfully at the Hillary Clinton loss, and the related tears being shed by her devotees. See it here:
https://www.youtube.com/watch?v=LGcaNY5eBWw

We’ve had wonderful black conservative leaders/thinkers/writers from Frederick Douglas through Thomas Sowell. What makes the current era so interesting is the sheer number of every day black citizens that are coming to the conclusion that its time to #WalkAway from the Democrat Plantation. Its a plantation built on grievance and ‘loser-think’ as Scott Adams might say.

African Americans from all walks of life are embracing #Blexit and thinking for themselves.

Kanye West: super star rapper walks off the plantation, grabs a MAGA Hat and doesn’t care what anyone thinks.

Candace Owens brings an amazing scholarly and personal approach to writing and speaking as a pundit. She’s strong as hell and independent.

Actor Isaiah Washington has done what most Hollywood conservatives will not: he has left the democrats behind and is establishing his own brand of conservatism. Men like Isaiah risk their livelihoods for the truth and living a life of principle.

What a time we live in!

In 2016 President Trump challenged the black community with “What have you got to lose?” The MSM in their full voiced insane opposition to Trump dismissed the man as a racist. We now see the lowest black unemployment in history as Trump began the policy of fighting for jobs with smart tax policy and de-regulation. We see his support now picking up in the black community according to most polls. We may see something unprecedented in 2020 as people from all walks of life enter the privacy of the voting booth.

And by the way, who delivered prison reform, an initiative so dear to the black community? President Trump, convincing reluctant republicans to go along with him.

Democrats have destroyed value, cheapened life and wrecked most of our large urban cores in the United States. We all deserve better, but Black Americans in particular deserve much better. Like the Irish of so many decades ago, they have endured enough. Its time to walk away from the mess that the modern democrat party offers to include: excusing blackface, exterminating black babies, creating and cultivating dependency, selling socialism, driving away employers with hostile policies, offering not hope, but hate.

Offering prayers for all of our brothers and sisters in the black communities across the US today, Martin Luther King Day, 2020. Blexit is bringing his dream closer to reality than ever.

One thought on “Blexit is Real: A Reflection for Martin Luther King Day”