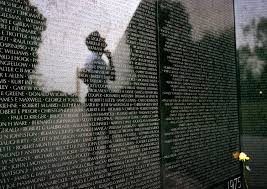 We live in an age where some confuse heroes with entertainers, role models for charlatans, but remembering Americans who died young places perspective in sharper relief.

As a boy, I spent afternoons dashing around the neighborhood playing “Army” with friends. Tree forts became castles, bushes hideouts and passing cars were tanks to be avoided at all costs. Somewhere in our minds we were aware of Vietnam, but our neighborhood sheltered us until two names came to personify the war: Corporal Frank Miller and LT James Francis O’Laughlin.

Frank was the uncle of my best friend while James O ‘Laughlin was the father of another classmate. Both Soldiers died in Vietnam. Each represented a link to my hometown of Athens, Ohio. Every Memorial Day, I thought of them. Decades later, I visited the Wall in Washington and etched their names.

Iraq and Afghanistan are my generations’ wars. One autumn day I took a phone call and was told my friend Dave was killed in Iraq. I was to escort him home. I reflected on our time together in the Special Forces. Fighting was the melody he danced to, and Dave knew the steps well, but he had a clean heart, too. Ever the consummate warrior-scholar, Dave was a well-read Green Beret who knew his craft but also helped local children wherever he served. I remember how he set his jaw in grim determination when challenged. Life can shift in an instant: I suppose that is the same look he had on the day the desert sun boiled and he made his fateful decision. There was no manual instructing me what to say when his wife threw herself onto his casket. The whole experience skinned my insides.

Some nights I stare at the stars and think of Bill, Laura, Ted, Justin (who grew up in Coal Grove, Ohio just down the river) and Drew. They were the brave ones willing to lay it on the line when things got rough and now remain eternally young, preserved in the minds of those who knew them best.

When visiting their graves, I don’t blunt emotions or debate the logic behind the wars in which they fought…that is for other venues. What I see are patches of grass containing dreams of what might have been—Daddy/Daughter dances, games of catch, first days of school, walks down the aisle, and reunions. Their unfinished lives moor me to the past while whispering the warning not to allow life to grow stale. The cemetery becomes a confessional where secrets to my friends leak out of my mouth and the past becomes grafted with the present, if but for a moment. But what of graves with no names and few visitors?

Just off to the right of the Fort Myer entrance to Arlington Cemetery stands a stone with a simple epigraph reading:

Behind this grave is number 8429. Behind that stone is 8443. Flanked on both sides are others. Who knew these brave souls “Known but to God”? 8067 is buried in one of the Civil War sections. Did this Soldier know my Great-Great-Uncle Eli who joined the Union at eighteen, saw action at Shiloh and Corinth and died soon after? I can only wonder.

I used to make it to a cemetery every Memorial Day but now visit on my own time. Instead, I try to make my friends’ sacrifices worthwhile by evaluating my relationships with others and occupying the in-betweens of my life by doing better.

Each one of us has the capacity to make a difference: surprising our children at school lunch; calling an old friend with whom we’ve lost contact; inviting a neighbor or clergy member over for dinner; visiting an assisted living home to listen to stories of a way of life which disappear with each breath; or taking off work to spend the day with a spouse. Maybe it’s a simple “Hello” to someone who least expects it. Showing kindness and empathy to fellow Americans—even those with whom we disagree—is the least we can do for Frank Miller, James O’Laughlin, Soldier #8067 and others who left behind unfinished lives.

And so what’s the cost? A moment of our time, that’s all. And what some wouldn’t give for a moment.