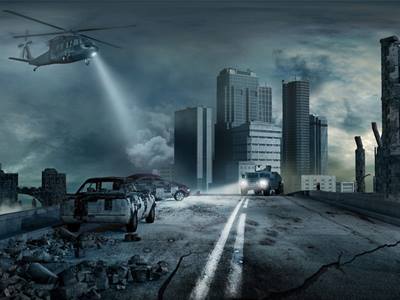 “Now I am become death, the destroyer of worlds.”
― J. Robert Oppenheimer

“It happened that a fire broke out backstage in a theater. The clown came out to inform the public. They thought it was a jest and applauded. He repeated his warning. They shouted even louder. So I think the world will come to an end amid the general applause from all the wits who believe that it is a joke.”
― Kierkegaard

“We need to be fit and ready for anything that might come our way.”
― Aaron B. Powell, Doomsday Diaries

What if an evil entity wanted to end human civilization? How would it happen? Dozens of movies and television shows have riffed on this topic, delivering all sorts of scenarios from floods, to ice ages, to alien invasions. But really – what if a technological or spectacular end was not feasible? How would it be done?

We have an answer right in front of us. It could and would be done by manipulation of the population into self destructive habits, beliefs and rituals.

Welcome to the Democrat Doomsday Machine circa 2019.

To date about 30% of the populace seems completely bought into the Doomsday Machine. Let’s have a look at how it operates.

The United States has one of the most permissive abortion laws on the planet, allowing the destruction of babies through the entire term in many places. Democrats have made it their mission to spread this malignant practice. Making it ’safe and rare’ as Bill Clinton once claimed is out the window, as his wife made clear in the 2016 election. Begun as race elimination through Margaret Sanger and Planned Parenthood, abortion is now an industry, dependent on grisly parts sales for profits. By teaching parts of society to not reproduce and to abort the inconvenient, the DoomsDayDems have the most critical part of their plan in place. Teach the ignorant to hate life.

Decades of Democrat leadership has destroyed vast neighborhoods in venerable US cities such as Philadelphia, Baltimore, Cleveland, New Orleans, Memphis, Detroit, Chicago, St Louis, Oakland, Los Angeles, and many more. The creation of dependency ghettos in the 1960’s by the Democrats was done to ensure a cycle of poverty and dependency and most importantly – votes – to keep Democrats in power. This strategy has been devilishly effective and has taught generations that they are victims that need to be provided for by the federal bureaucracy. Worth noting is the level of crime, drugs, and guns – things the DoomsDay crowd claim to hate – are highest in Democrat controlled areas. We must go past assuming incompetence and assume its on purpose.

Working in tandem with groups like the NEA (teacher’s union) and many other leftist organizations, Democrats have ensured that public education in the US has declined in most metrics on an international scale for decades. Leftist indoctrination and revisionist history are the urgent topics while preparation for the real world, college, STEM skills, etc, are secondary at best, non-existent at worst. Elitist Dems choose private schools and make sure the public system produces vast ignorance. Even richer suburban schools have dropped civics and accurate history courses in favor of leftist skewed garbage. Leftist teachers spew their ideology at students eager to please for grade point average purposes. What we have here is perhaps the most subversive Democrat Doomsday initiative which is in full bloom. (And – they criticize all other options)

Again, active for decades, institutions of higher learning have become the Fascist regional bases for the Democrat DoomsDay apparatus. While preaching diversity they eliminate diversity of thought. They take in vast sums of money, spend it poorly, and rely on government loans to those who least afford them to exist. In the worst scenarios leary parents pay for the tuition of their children at leftist institutions only to have them graduate with warped world views and degrees of questionable value. Higher Ed has become a museum of wax figures with views based in demonstrably wrong theories, like socialism. However, ignorance of the ‘educated’ is key to their strategy; they have successfully created a willingly ignorant educated class.

We’ve seen in the last 10 years concepts that have stood the test of centuries put on their heads by the Democrat Doomsday thugs. What better way to disrupt human reproduction than to get them fighting about what it means to be male and female. The worst victims here are those with mental confusion that are easily manipulated. They are not the issue. The real issue is taking a condition that affects a severe minority of the population and giving it the attention of the civil rights movement in the 1960’s. Its fake and agenda driven. Its ultimate aim is to destroy the family.

Related to the last point and more recent but the next move in the play book is to attack and shame traditional gender roles. Attacking so called toxic masculinity is code for eliminating father figures plain and simple. If strong fathers do not exist, the family is wrecked and males become dysfunctional and self destructive. The DoomsDay Democrats need strong males to be eliminated to achieve their goals.

Underway for decades now – this was a very early initiative in the DoomsDay strategy. If women can be taught to hate men, to assume the worst about themselves, to assume the mantle of victimhood, then they will seal themselves off from men, thereby interrupting the ability of humans to procreate. Wrecking femininity has to happen for the Doomsday strategy to work. The recent emergence of very shrill hateful language from leftist female Democrats is evidence that decades of emersion in twisted feminist ideology is working for their goals.

Shrill and venomous voices scream night and day about what can and cannot be said – all emanating from the left. Tipper Gore’s famous crusade against crude rap lyrics now seems quaint. Anything can be said by the Stalinist left. Nothing but polite acceptance is tolerated. This is how the DoomsDay Democrats get their way. They silence cowards like Romney and all the Bushes. They Bork. They lie in extremes and then move on. Classic form of bullying.

Who alive today that was an adult at the end of the cold war would have thought that in our life time we would see very robust acceptance of socialist thought in the United States? Yet – there it is in full bloom with Bernie, Alexandria, and a host of other accepting Democrats. Surely – to accomplish the DoomsDay strategy – the self destruction of socialism has to play a role. Its done quite well in Cuba and Venezuela – the last hold outs – while ‘communist’ China has really become a fascist capitalist economic state. The Democrats hope we do not notice that and continue to merchandize envy in order to bring down the United States. DoomsDay comes when everyone blames the other for their wants and needs. It starts with the poor. It has started.

Armageddon is real for the Democrat DoomsDay cult: its called Climate Change. In an odd revisit of the inquisition we now have the term ‘denyers’ being merchandized by the cult. While this one gets massive amounts of attention, it really is just a back drop for all of the things mentioned above. Its dogma in the Domesday cult. It may not even be that important to them – but its a convenient stick with which to beat the opposition.

This one might be the hardest to understand, as it flies in the face of many of the Stalinist Doomsday Left’s longstanding alleged causes: women’s rights, gay rights, freedom from censorship and on and on. The fact that the DoomsDay Dems embrace the hijab, embrace vast immigration (much of it illegal) from countries that are intent on exporting radical Islam, is evidence of a more sinister intent. Importing vast numbers of those at odds with basic American culture and our constitution is meant simply to cause anarchy. Look at the above list and then throw in millions of those that hate our freedom. Its almost like in an afterthought, the DoomsDay crew said – ‘yeah – throw that in there too’. It makes little sense other than to continue the wrecking of – well – everything.

There is the case for the Democrat DoomsDay Machine. As you back away and look at all of this what you may see is a very sick unvirtuous circle of destruction. Our point here is that we need to stop assuming this is a coincidence; this is a plan that has been thought out with several obvious aims: reduce the United States to a former power; reduce the population of the United States; confiscate the possessions and wealth of the population; cause chaos.

If you accept these observations, share this article and ask others, perhaps political leaders, what they intend to do about it.

“It seems people don’t want to be awake these days. Apocalypses are easier slept through than experienced”
― Charles Stross

5 thoughts on “The Democrat Doomsday Machine”