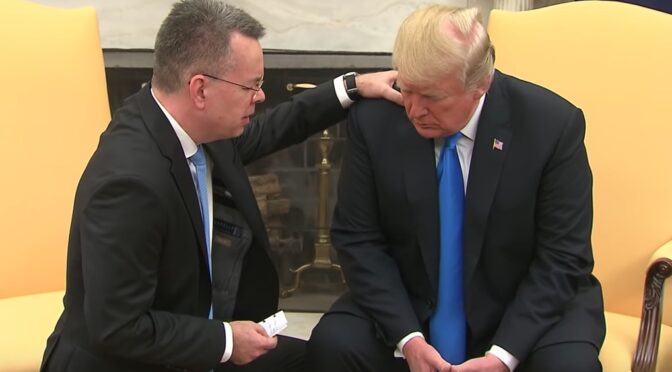 As high as the heavens are above the earth,

So high are my ways above your ways

and my thoughts above your thoughts

We phrase the title of this article as a question, not an assertion, because as the great prophet teaches above, we dare not proclaim to know what the Almighty is thinking.  We are however, provided many hints about his concerns, his doings, his past deeds and his intentions for all of us through divine revelation.

This year has been filled with the unexpected but recent events have this author questioning whether the divine hand is directly present in current events.  I present the following reasons from the perspective that America is the last best hope for planet earth, and as goes the United States, generally speaking so will go the rest of the planet.

President Trump today announced he would sign the ‘Born Alive Executive Order’, which makes clear that infants born alive in any context should be assisted, saved and protected.  Did anyone think that in our lifetime such an order would be necessary?  As we learned from the vacant and banal Governor of Virginia, we now do.  So much for the Hippocratic Oath he took as a doctor.  This action the President took today triggered this essay for the 53rd Regiment.

The United Nations General Assembly speech by the president this week was a clear and direct wake up call to the world about the evil doings of China; Venezuela, Iran and Cuba were also singled out.  It cannot go unnoticed by the Almighty that the Atheist Communist dictatorship in China is presiding over and is the source of, the most vile activity on the planet.  It has done so while sealed off from the world for decades.  Slavery, infanticide, organ trafficking, absence of human rights and the likely engineering of a bio-weapon, the China Virus, are all clear examples of pure evil.  Is Donald trump the imperfect vessel selected to take on this malefactor nation?

But if thou indeed obey his voice,

And do all that I speak;

Then I will be an enemy unto thine enemies,

And an adversary unto thine adversaries

Many have observed that God has made a habit of choosing imperfect messengers.  Kind David had many faults, the worst of which was sending his lover’s husband to be killed in battle.  The old testament is filled with many reluctant and imperfect representatives of the Almighty.  Christ himself associated with many deplorables.  Was Trump a saint before the presidency?  Heck no and we all knew that.  Is God using him?

Sister Dierdre Byrne’s appearance at the GOP Convention was striking.  She spoke in bold terms of being ‘pro-afterlife’ and she put her rosary on display.  Leftists were repelled by this appearance as they always are by truth.  The larger question for all of us is how Sister Byrne got into the orbit of our President and his party.  Contemplate that.

Soon thereafter, following his acceptance speech, a selection of songs were sung by a talented tenor, that included the Ave Maria by Schubert (also played at this writer’s mother’s funeral).  I’ll admit to being stunned when this occurred.  This piece, beautiful, ancient, classy and ultimately a prayer to the Blessed Mother of Jesus – seemingly had no place at a political event.  But there is was, placed with intent.  By whom?  For what reason?

The timing of the death of Ruth Bader Ginsburg is striking.  Late enough to be during the critical period of the campaign early enough to be approved by the Senate, and to have enough positive votes identified.  While we will resist speaking ill of the dead, we will not resist pointing out that RBG was a frequent vocal fan of infanticide.  Our President is present at a critical moment and is committed to making a difference with his next SCOTUS pick.  To think this is all a coincidence is difficult for one of faith.

The March for Life: POTUS shows up.  Reagan phoned it in.

The Fake News MSM is now working tirelessly at destroying the President but he seems to be thriving and using their negativity as energy.  Who else could do this?

Blessed are you when men shall revile you, and persecute you, and say all manner of evil against you falsely, for my sake.  Rejoice and be glad, for great is your reward in heaven…

The President has in fact surrounded himself with people of faith.

Black Pastors visit him frequently, he’s been prayed over by many others.

So keep your eyes open, fellow patriots.  Something bigger than all of us may be happening.  This imperfect man, this billionaire, this reality star, this product of Queens, NY, this brash fighter, this occasionally mean ‘punch back harder’ guy, this tweeting 3 level chess brawler and Don Rickles style insult artist, might just be a tool of the Almighty, acting as a bulwark against the many evils that confront the United States right now.

You would have no power over Me

Were it not given from above….

2 thoughts on “Is the Devine Hand Present?”