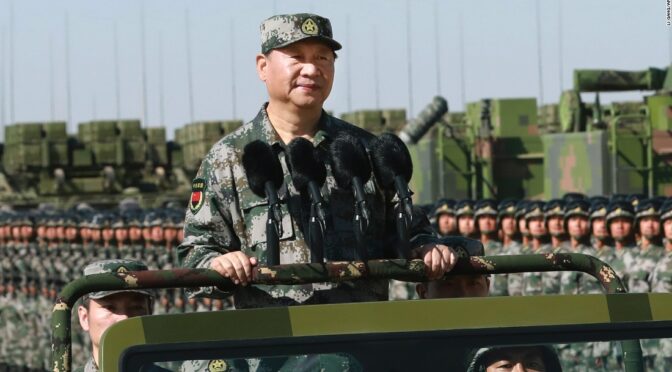 Mausefalle is German for mousetrap.

Let’s begin with a reflection on CNN, the ‘news’ outlet that put a series of favorable news stories out on the occasion of the 100th Anniversary of the Chinese Communist party:

“Every morning the editors of the Berlin daily newspapers and the correspondents of those published elsewhere in the Reich gathered at the Propaganda Ministry to be told by Dr. Goebbels or by one of his aides what news to print and suppress, how to write the news and headline it, what campaigns to call off or institute and what editorials were desired for the day.”
― William L. Shirer, The Rise and Fall of the Third Reich: A History of Nazi Germany

To CNN Leadership we ask: who is giving you your orders?

The Chinese Communist Party has out-third reich’d the third reich. Let’s have a good look at how they’ve done it. Upon further investigation, it seems like they took the play book, enhanced it, updated it and seem to be going for the 1000 years that Der Fuhrer originally forecasted for the original.

The similarities are profound and there for all to see. We know. We all know.

Nazi Germany had Mein Kampf; a book which became mandatory to have on display in one’s home.

ChiComms have Mao’s Little Red Book, which some say may exceed the bible in the number of copies printed over time.

ChComms are building the so called ‘Belt and Road’ system to tie together economic conquests far beyond it’s own borders.

ChiComms use the Ministry of State Security, a massively funded enormous octopus of politically oriented security, espionage and intelligence operations.

Nazi Germany used a multitude of social organizations like the Hitler Youth to control the minds of its citizens.

ChiComms use unique China social platforms to control behavior, going so far to now assign social scoring based on Communist Party desired behaviors. They also use the Confucius Institutes to indoctrinate the masses and infiltrate university systems.

Nazi Germany had the Nazi Party, and to maintain or achieve any influence or power in society of any kind, one had to be a member of the party.

It’s well established that the ChiComms have the same arrangement with the Communist Party in China.

Nazi Germany controlled businesses directly, while allowing private ownership. Industrialists could remain wealthy as long as they did what they were told. Many companies still on the Fortune 500 list today were compromised by Nazi Germany 80 years ago. Some paid reparations for using slave labor.

ChiComms seize 50% ownership of corporations and steal their intellectual property for use elsewhere. In both cases, business executives from all over the planet are going along to get along. All completely compromised. Many of the same companies compromised by they Nazis 80 years ago are also compromised today by China. Will they someday pay reparations to the Uighurs?

ChiComm genocide against the Uighurs is only now beginning to be understood. How far has it gone and who else has been included? Death, organ harvesting and slave labor are just a few of the suspected horrors.

Nazi Germany created border disputes with most of it’s neighbors. The Alsace, Czechoslovakia, Poland and others learned hard lessons. Austria was assimilated. The European continent was largely controlled by Berlin for a time; only Hitler’s relentless impatience screwed it all up for the Reich.

ChiComms have similar issues with their shared borders, India and Russia most notably. Russia will pay a long term price with their Chinese neighbors. Its only a matter of time. Taiwan is in scope for repossession. Hong Kong is suffering a reversal of all freedoms. All ChiComm neighbors are on alert. Japan, the Philippines and Australia will have a long list of issues to deal with soon enough. Who will fight? China has much more patience than Hitler’s Germany.

Nazi Germany had a quiet enabler of its hatred of the Jews in FDR. He famously ignored a ship full of Jewish refugees, many of whom perished when sent back to Europe. He also imprisoned Americans of Japanese descent.

ChiComms have a similar enabler in Joe Biden, who recently said of China’s treatment of the Uighurs: “Culturally there are different norms that each country and their leaders are expected to follow,”; don’t worry Chairman Xi, those big bucks you secured for Hunter are paying off handsomely.

Nazi Germany sent Rommel and his Afrika Corps to North Africa to carry out several missions/strategies that included bailing out Mussolini’s failing troops, and securing access to the rich oil fields of the middle east.

ChiComms are active all over Africa currently, making investments in infrastructure in order to secure long term commitments of raw materials, oil, and other strategic missions. They intend to hold those taking their help hostage to their influence for decades.

Nazi Germany tolerated organized religion, but had plans for its longer-term demise. In the shorter term they sent any clergy openly opposed to their agenda to concentration camps.

ChiComms have tried to openly corrupt the growing Catholic Church in China by insisting on approving its leadership. The survival of said church is an open question. Communism is famously atheistic and anti-religious.

Nazi Germany disregarded hundreds of years of enlightened history and thought by its many famous philosophers and saints.

ChiComms have literally destroyed much evidence of the achievements of Chinese history prior to the Communist party.

Nazi Germany invested heavily in technology and ‘wonder weapons’, developing the first rocket guided bombs and even jets before the end of WWII.

ChiComms are investing in bio-weapons. We just experienced one. How’d you like it?

This list of ChiComm treachery is by no means complete. Leave your own observations in the comments below.