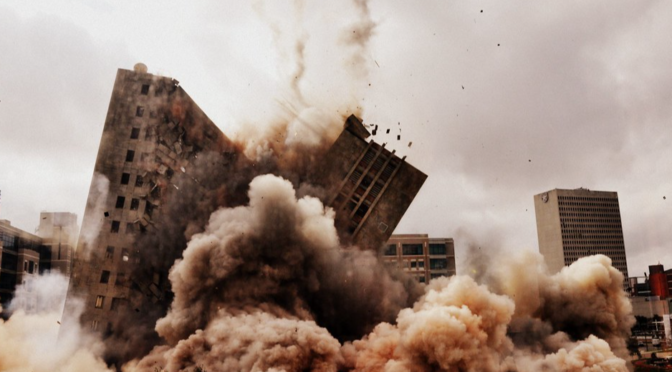 “The hands of every clock are shears, trimming us away scrap by scrap, and every time piece with a digital readout blinks us towards implosion.” — Dean Koontz

Fellow Patriots we are about to witness the most satisfying downfall of illegitimate Democrat power mongers in a generation.  That is, if we do not screw it up!  So first of all, show up and vote – regardless of how blue your state, region or locality is.  We have the best chance in decades of pulling leftist jerks out of office.

How did we get here?  We got here through the most overt and brutal actions taken by a devoted group of sick leftists ever experienced in a western republic.  Thankfully a majority of Americans are not having it.  (Sadly a large number of leftist mental slaves are fine with it).  Here is a partial list of what is causing the implosion:

Leftist Dems are out of the closet on death.  They love it.  They have ensured our major cities are all death traps – with glee.  Shootings, car jackings, random stabbings, train platform pushings, convenience store looting, disease spread through defecations on the streets and on and on and on.  PHL, NYC, DC, Detroit, NOLA, STL, LA, SFO, Chicago and so many others.  Are they lost forever?

Fentanyl coming across the border resulting in 200,000 deaths a year.  Addiction of many young people to cannabis now that they have legalized it.

Abortion on demand in blue states, mainly targeted at the black population, who they secretly want to exterminate.  The country has ignored their raving about the end of Roe.  Reasonable people know it’s a savage practice.  This is but one reason African Americans are running from the dems in record numbers.  See ‘Blexit is Real’ on this site.

Turn little kids into transexuals: if they do this early enough they will be unable to have their own children and many will kill themselves.  This is all on purpose.   Already happening.  Leftists are using social media to encourage transsexualism as a social contagion.

Insisting on MRNA ‘vaccines’ being given to little kids – even now – when its become obvious that the sudden unexpected death of young people is a result of these vaccinations – is another product of the death cult leftists.

Definitely demented and quite possibly a blank, programmed clone.  Compare him to 10 years ago.  Face lifts?  Botox? Very hard to explain.  He was always stupid and a liar so that’s still there.  Biden created Hunter.  He’s a known and observed pervert.  He assaulted Tara Reid.  He’s been racist on camera dozens of times.  He’s mean.  He’s incontinent.  This is who the Obama/Rice/Klain/Jarret cabal installed to do their leftist bidding.  Programmed mental slaves enabled it.  Election fraud sealed the deal.

Incompetent, can’t speak even with a prompter, unqualified, unprepared, and possibly more inept than Biden.  Democrat standard issue these days.

Schumer: grotesque ass clown, wife may be a dude, likely part of the Epstein Island crowd, should be investigated.  Guantanamo material with Nancy.

Dem Governors, Mayors and District Attorneys: delivering filth and death all over the country.  Had enough?

The entire lockstep Dem house and senate – and notably a collection of RINO’s – who have gone along with the entire program.

They have wrecked it by spending 25% plus of GDP in one year, most of which will never be traced and seen ever again.  If you were exposed to ‘econ 101’ in high school or in college, this should have been clear when they were planning to do it.  Inflation will run rampantly for a long time because of this insanity.  Your income, your retirement and your home values will be sabotaged.  Manchin knew it but ultimately did not have the personal fortitude to fight it.  He will be thrown out of his office for it when his next election comes; Sinema too.  The standard collection of RINO traitors enabled different part of the reckless spending as well.  They will be held to account certainly – more on that in a future column.

Most Latinos are running from the leftist Stalinist dems.  They know.  They came from poor conditions to be here and build families and make it.  They see it all being destroyed.  The ramifications of zero borders will be felt for decades to come, most notably and not discussed: terrorist cells.   Add that to drugs, death, human trafficking and broken infrastructure and you get a democrat paradise.

BTW – watch for dems to start labeling Latinos as racist white supremacists now that they are abandoning leftist communists and perverts.  Just watch.  It is coming.

Trump was right about the border.  Border states which the dems want to undermine, and all getting redder in the meantime.  In the end, over the next two years, they will complete the wall on their own.  Kari Lake and Greg Abbot will take care of it.

“Maybe it’s time to go back 2,000 years for a spiritual renaissance. If not, our days may be numbered and a terrible implosion is coming. There is no more middle ground. It is one or the other.” — Joel C. Rosenberg

Its all documented.  Much of it on video.  Afghanistan pull out the biggest disgrace to our Military in a decades.  Those who presided over it still in their jobs with no shame.  Iran empowered and enabled.  North Korea back to missile launches over Japan.  Saudi Arabia gives Joe the finger overtly.  Joe begs every dictator for more oil while shutting down American industry.  Venezuela and Cuba: empowered.  And of course, Ukraine.  War encouraged personally by Biden, who likely saw it as a way to conceal evidence of his own corrupt involvement in that country.  Putin blamed for all of Joe’s mistakes and screw ups.  Europe not taking ownership – letting Joe take all of it.  Cleaning all of this up will take years – some situations may be irretrievable.

The top ranks of the General Officer corps are a mess and now completely political appointees.  Without a second Trump term to re-engineer it, Biden has now completed what Obama started.  Why should our military be any different than the FBI to the dems?  Its just another political enforcement wing to them.   The Generals will need to be eventually fired.  Certain departments of the military may need to be shut down, like ‘TRADOC’ and others involved in the purposeful leftist indoctrination of our troops.  The staff of West Point, Annapolis and the other academies may have to be completely turned over.  Much work ahead.  Recruitment is way down and morale is at all time lows.  Eventually our readiness will be in question.

Blue cities and states have ruined their police departments and at the federal level, the DOJ and the FBI are forever compromised and ruined.  Thank you leftist Stalinist Dems.  Many hearings and ultimately executive orders lay ahead to find the next way forward without them.  Americans are tired of the circuses they have created.  On top of this, the DC courts are completely compromised with inbred judges and garbage juries.  A decentralization of the Capitol is now urgently needed.

Schools: A Lost Cause

Public schools are now leftist indoctrination centers.  Years from now they will likely begin to disappear as parents will find other options.  This has already started, as each year the number of kids schooled at home increases,  Higher Ed has been in decline for years and a great shake out has begun in which many universities simply will not make it due to their own lack of relevance to parents and students.  The left ruined education in the US.

Does all of this together sound like an implosion to you?  It does to me.  Good patriots everywhere will participate in the implosion and enjoy the show!!!  Be sure you participate in making sure the designers and implementers of all this chaos are sent home.  Go vote.  Encourage others.  Fight Back!!

“Haven’t you felt it? The loss of autonomy. The sense of being virtualized. The devices you use, the ones you carry everywhere, room to room, minute to minute, inescapably. Do you ever feel unfleshed?
All the coded impulses you depend on to guide you. All the sensors in the room are watching you, listening to you, tracking your habits, measuring your capabilities. All the linked data designed to incorporate you into the megadata. Is there something that makes you uneasy? Do you think about the technovirus, all systems down, global implosion? Or is it more personal? Do you feel steeped in some horrific digital panic that’s everywhere and nowhere?” — Don DeLillo