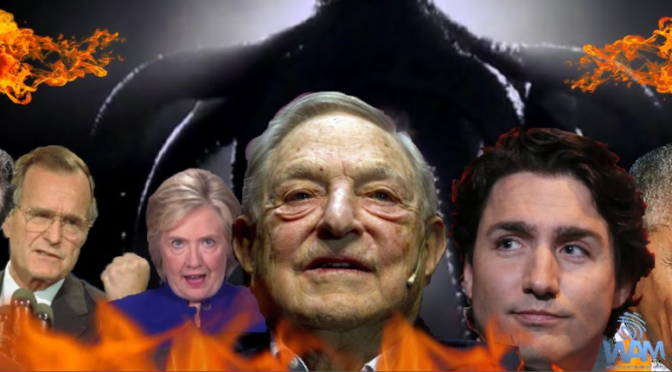 By BlackJack Pershing, @BlakjakPershing on GETTR and pending on Truth Social

That new world order stuff didn’t work out so well for George HW ‘Poppy’ Bush, the so called Patrician President who blew his second term by breaking an infamous promise, thereby enabling 8 tawdry years of Bill and Hill.  At least he had good taste in his escape location – Kennebunkport – unlike W who hangs out in a dirt patch in Crawford, TX.  Go figure.  Both are over anyway – bigly.  Thrown onto the ash heap of history by one, Donald J Trump.

The world HW dreamed of was globalist.  It was an unworthy pipe dream, put together by a cabal of global elitists.  They are still around and for the moment, have a number of their disciples in power.

What they have now created is best called the New World Disorder.

Here are the components:

Where are we now?  In a seeming repeat of the ‘spheres of influence’ world of the 1800’s in which the Great Powers sought to divvie up places like China and Africa, in some cases by making parts of them colonies and territories and in some cases through other nefarious means like outright invasion.  China is practicing this strategy.  Russia certainly is.  Europe as usual is caught up in preserving lifestyle and comfort for its citizens and the US is being used for myriad reasons by many, adding to its own demise, while bankrupting itself.

Trump was on to all of it and began all of the difficult discussions needed to wake people/regions/countries/governments up.  He boosted Poland, he challenged the lazy former empires of Europe, he aligned with Brexit England,  he made progress with North Korea.  He engaged Japan on defense of the East.   That was just 2 years ago.  Its recoverable.   It was America First, but all countries putting their people first, and freedom first.

The so called ‘new world order’ really was nonsense dreamed up by globalists – bankers, politicos, Bilderberg attendess, Davos dummies – all about making money.  Clearly we can all see it’s a joke.  We all know.  A bad idea, decades old, also left on the ash heap of history with the Bushes.

But for now?  The New World Disorder is the state of affairs and the President will play a large role in how it unfolds.   Democrats voted for this.  Not as many as is claimed, but a disturbing number of Americans are uninformed brainwashed leftists.  The kind that vote democrat, get mugged, blame themselves and sign up for critical race theory training.  This is Fall of the Roman Empire stuff, or worse.  Soros enables it certainly, but the tendency of some to embrace dumb ideas is alarming.

Putin and Xi are in the lead by about 24 to 10 in the 2nd quarter of this football game.  Biden has trotted out the worst kicker in the league, named Kamala to punt.  As George HW might have said ‘wouldn’t be prudent’.  Indeed.  A thousand points of stupid in fact.  This is your country on democrats.  The New World Disorder.