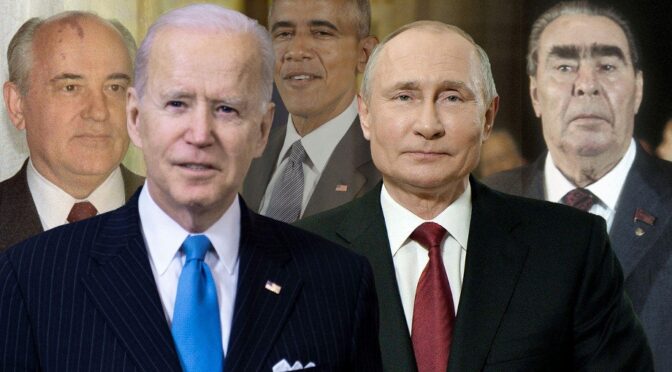 March 2012, 7 months before Obama’s re-election campaign:
President Obama: “On all these issues, but particularly missile defense, this, this can be solved but it’s important for him to give me space.”

President Medvedev (Russia): “Yeah, I understand. I understand your message about space. Space for you…”

President Obama: “This is my last election. After my election I have more flexibility.”

President Medvedev: “I understand. I will transmit this information to Vladimir (Putin), and I stand with you.”

… and Obama proceeded this conversation by reversing the decision to give the Polish & Czech’s anti-missile technology in 2009. In 2014 Russia invades and annexes Crimea. Obama and Biden threaten/apply sanctions and where is Crimea today? It is part of Russia.

Obama policy: appeasement and accommodation from every angle. A thousand points of stupid creating the New World Disorder. A mega mind like Obama has it all figured out (extra helping of arrogance). A mini mind like Biden is clueless and believes he’s brilliant (an example of a low wit not knowing his limitations).

Fast forward to present day, Russia invades Ukraine. Biden diddles for 18 hours on announcing sanctions, and many of them  were sanctions already in place since 2014. Another point of stupid.  Putin no doubt mocks Biden and Europe will undoubtedly fracture on how to deal with the invasion of Ukraine. After all Germany gets 32% of their oil from Russia.

Biden hasn’t learned a damn thing from 50 years in Washington. Everything he touches is worse off after he gets involved. As SecDef Robert Gates said, ” he has been wrong on nearly every major foreign policy and national security issue over the past four decades.” America “elected” (that is to say if you believe Biden was really elected) the village idiot to run America. Are we really that stupid? The master minds like Obama, Pelosi and their Big Tech and media allies believe so.

Since 2015 the democrats demonized Russia and Putin relentlessly  falsely framing Trump with the Russian Hoax. Durham’s investigation will reveal the truth hopefully soon. However, a news flash to Hillary, Brennan. Clapper, Schiff and all the other frauds, the Russians know what they did and did not do. Putin has a full deck of cards he is holding. One day he will drop a card and it will be personal with love from Moscow on how dishonest many American politicians are. While Putin is evil and not acting in Russia’s best interest,  he is devious and like all dictators, it’s personal with him one day he’ll share US politician’s communications of how they planned and targeted Trump, his campaign and Mike Flynn.

2 thoughts on “Biden Administration: A Thousand Points of Stupid”