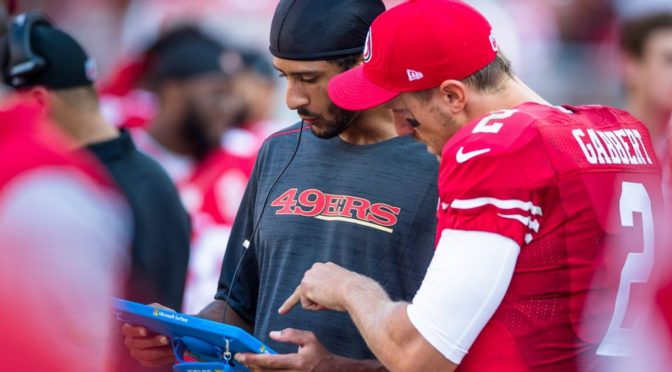 Kaepernick: Coach, why did you bench me? Why I am not starting?

Coach: Colin, I’ve shown great restraint not cutting you but I haven’t ruled it out. Candidly, ownership doesn’t understand leadership in the NFL. The NFL doesn’t  respect leadership or the sacrifice of American warriors that have given much for this country. It’s all about the money and political correctness. Colin, you put yourself before others. You disrespect the colors of our nation. This game is not about you, your beliefs and whatever causes you believe in. The operative thing you need to understand is that this is a game, a football game. This is not an opportunity for you to put yourself before the team. In my book Colin, leaders put the team before self. You have failed this simple test. You are a very selfish individual that fails to understand what a privileged life you have been given as an American citizen and an NFL football player.

Kaepernick: But coach, “I am not going to stand up to show pride in a flag for a country that oppresses black people and people of color,” Kaepernick told NFL Media in an exclusive interview after the game. “To me, this is bigger than football and it would be selfish on my part to look the other way. There are bodies in the street and people getting paid leave and getting away with murder.”

Coach: Colin, what did you do in the off-season? Where did you spend your time? What inner city communities did you help?

Kaepernick: Well I was rehabbing in the off-season. I chose to start this protest during the start of the season.

Coach: Understand Colin, yup, noticed. My assessment is because over the past several months your relationship with management has turned sour. You requested a trade last spring, which never came, big mistake by ownership. I would have released your ass. You also spent most of the offseason rehabilitating from operations to your left shoulder. You lost the starting job toBlaine Gabbert last season and I see this as one more example of poor leadership on your part validating your removal as a starter. You are really just acting out like a petulant child. You had no idea that you would attract a broader element of malcontents that failed to learn the history of this country, the lessons of Martin Luther King and the blessings of being an American. Ya see Colin, even a pile of crap attracts maggots. You have a whole infestation of maggots following your every move.

Kaepernick: Coach, you are disrespecting my beliefs. I have a right to kneel.

Coach: You do. I have a right to bench your ass and if the 49ers had ownership that valued our country before themselves,  you’d be released. I’m disgusted with you Colin. No one wants a selfish, me- first player that doesn’t know our country’s history or appreciate it. You haven’t done one damn thing to improve the conditions for those suffering from poor economic conditions or violence. Actions speak well beyond taking a knee while others are rendering honors to our flag. Don’t confuse what you are doing with helping fix these challenges. You have set a very poor example for American youth. I’m disgusted by you!

Get the hell out of my office and cement the clipboard to your ass!

One thought on “Candid Conversation with Kaepernick”