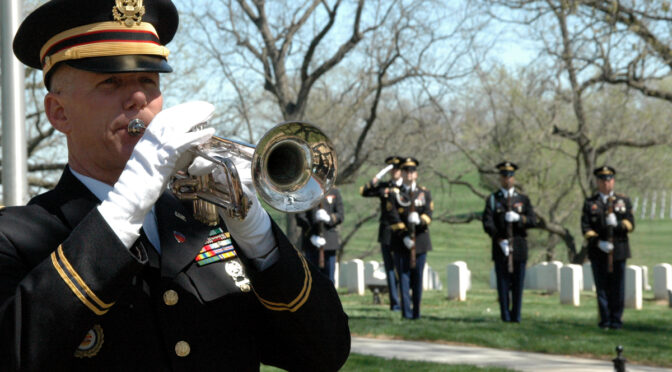 “…Such, such is death; no triumph; no defeat; / Only an empty pail, a slate rubbed clean,/ A merciful putting away of what has been.”  –Charles Sorley, Killed in Action, World War I

Visit any military cemetery and you’ll find rows of headstones, perfectly aligned, like a military formation.  In these sanctums all are equal.  During a trip to Arlington, I visited Section 60 and pointed out to my children the different religions of Americans killed in Iraq and Afghanistan…all died wearing our Nation’s uniform.  But what of those left unclaimed?

I never served with Corporal Samuel Barnes, nor did I stand in formation next to Private First Class Nathaniel Thompson or share rations with SGT Randall B. Shorter.   I served with none of these veterans but attended their funerals with others who did not know them either.

Recently, motorcycle riders—led by local law enforcement and a hearse—weaved their way through traffic to deliver the remains of unclaimed veterans to their final resting place.  While we might not have served with them, we knew who they were.

At some point, veterans leave the familiar for the unknown where drill sergeants loudly introduce themselves before reducing recruits to their most base.   Later, they form friendships while sharing stories of girl/boyfriends and dreams of the “good life” following discharge.  Ironically, life is sometimes easier following orders.

With DD-214s clenched in hands many service members journey into the civilian world to jobs, schools and arms of loved ones: for others adjustment proves difficult. Military life often requires shifting into high gear for stretches of time and some find it difficult to downshift, becoming stuck with destinations lost in the fog of addiction and loneliness. In the end, they are alone…until now.

Army veteran Carl Horn sent an “all hands” message asking for attendance at the burial of unclaimed veterans: “What a tribute that would be for four of our own who have no one else to lay them down in peace, God’s love, and thanks for a job well done.”  The message reminded me of a note sent years ago from Ms. Blanca Trevino of San Antonio exhorting folks to attend the funeral of Ms. Molly Jane Hoff who served as an Army nurse in the Korean War.   Whether it was hope for absolution or sense of duty, I began attending these funerals.

At the cemetery bikers exchanged handshakes with suits, Knights of Columbus sat with Blue Star mothers and active duty stood at attention with private citizens; all came to honor the dead who deserved a sense of noblesse oblige.  Service members Kevin Sweeney (USMC), Cherice Carter (Navy), Brandon Cuffee (Army) and Lieutenant Trimeka Thomas (Navy) saluted the remains, and Ms. Jean Ray Williams sang “Mansions of the Lord” before rifles cracked and the final notes of Taps whispered to the dead they could sleep easy in the company of friends, their missions complete.

Not long ago these veterans were seen but unnoticed.  Today we claim them.  We honor them.  They are our sisters and brothers, and we bid them goodbye.  Perhaps a child or parent reading this can take comfort knowing their loved one was remembered.

Zoltan “Z” Krompecher presently serves in South Carolina where he lives with his family.  These views are his own and do not necessarily reflect the views of the United States Army.