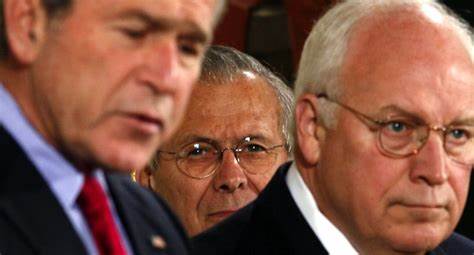 “…freedom and democracy will leave Marxism and Leninism on the ash heap of history.”

Ronald Reagan, Speech to the House of Commons, June 8th, 1982

Despite recent efforts by Joe Hiden and the democrats to revive both of those ‘isms’, Ronald Reagan remains right.

And we add to the Ash Heap a number of other people and things that President Trump has helped modern Republicans understand and comprehend in the light of day.

Ladies and gentlemen, let’s celebrate the removal of Liz Cheney from house leadership and the official transfer of she, herself, her family business, and the entire franchise of establishment republicans to the ash heap of history!

Liz is over.  She’s shrieking like an angry demon as she is stripped of relevance.  She will be an MSM darling going forward.  But.  She is over.  Trump?  #NotOver !!

What else is over?

Country Club republicans also known as ‘Rockefeller’ republicans.  Wealthy republicans worried about their portfolios that went along with the republicans from a strictly economic perspective.  They do not care about offshoring of jobs and the working class.  They sold out to China to line their pockets long ago.  The Chamber of Commerce is their god.  Cheap imported workers are their preference, legal if possible but illegal will do just fine.  Trump called them out.  Many defected to the DNC.

“What does that get us? A discontented, lazy rabble instead of a thrifty working class. And all because a few starry-eyed dreamers like Peter Bailey stir them up and fill their heads with a lot of impossible ideas!”

George W: as analyzed in another column on this site, ‘Confessions of a Reformed and Redeemed W Voter’, W has soiled himself beyond recognition.  He’s over.  Trump?  #NotOver.

Dick Cheney: his usefulness at its maximum was scaring and pissing off the democrats in the mid-00’s.  He was good at it.  Intelligent, concise, glib and sometimes humorous, Dick Cheney was the lightning rod of the W administration.  Unfortunately most, if not all, of his ideas have proven to be misguided at best, arrogantly stupid at worst.  He should have stayed at Halliburton.  Another non-serving war monger, devoid of proper training and strategic thought.  An intelligent idiot.

The Bush’s, despite their desperate attempts to pretend otherwise, are old money patrician class elitists.  Everyone has their place for the Bush’s.  For America’s working class, its pulling themselves up by their bootstraps with nothing after their jobs are shipped to the Bushs’ Chinese business partners.

Colin Powell, Condoleezza Rice, Donald Rumsfeld: they blew it after the initial response to 9/11.  With no initial worry about outcomes, they started two wars with untested strategy.  Powell likely knew the flaws and kept his mouth shut.  Condi may be best remembered for posing for a buddy shot with Muamar Khadhafi.  Dope.  Rummy’s shock and awe turned out to be a tactic, not a strategy.  The glib technocrat will go down in history as the arrogant ass that screwed it all up.

Bush-World enablers: Boehner, Mitch McConnell: Republican congressional leaders were very comfortable with the Bush traditions, the lack luster results, the sell out of the American worker.   They themselves have proven to be in their roles for money, not service.  Slobs, hypocrites and sellouts.

Why did it never occur to Bush-world that their jobs were to maximize the success and potential of the American people – all of them?  Why did they enable the communist dictatorship of China?  Why did they offshore our jobs and then blame us?  Because they never got it and can’t get it.  They don’t relate.  Never did.

In the 2000’s Bush-world had the vexing problem of being the only alternative to DNC chaos.  On the surface they seemed like the adults in the room.  They had a veneer of competence.  That competence was for a world gone by.  The 1970’s specifically.  Otherwise they were completely unprepared for what dawned in the 21st century.

Trump woke up conservatives.  He made it respectable to care for our working brothers and sisters that were forgotten.  The Trump coalition is bigger and broader than anyone realizes.   You know the stats from the Trump coalition in 2020.  The demographic changes terrorize the DNC.  Blacks will be 50% for Trump in 2024.   Latinos will be 70% for Trump.

Mitt Romney, Adam Kinzinger, Paul Ryan, the McCains and many more – they all play a nasty game of arse kissing with the same media that have called them racists and grandma killers in the past.  One wonders why they are compromised?  What do they have on them?

Members of The Hot Tub from Hell:  Frank Luntz, Karl Rove, George Will, Bill Kristol, David Gergen, All Lincoln Project members, Anthony Scaramucci, and most fired Trump Administration personnel.  They are the worst of the worst bottom feeders.  Mostly devoted to themselves and the lousy books they write for the feeble minded.  A sad group of diaper wearing, increasingly irrelevant clowns.

What else is over?  Please share below, fellow Patriots!

3 thoughts on “Liz Cheney, Bush-world and the Ash Heap of History”