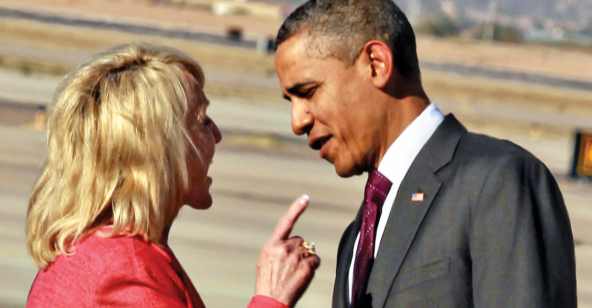 “We cannot afford all this illegal immigration and everything that comes with it, everything from the crime and to the drugs and the kidnappings and the extortion and the beheadings and the fact that people can’t feel safe in their community. It’s wrong! It’s wrong!”

“I believe the people of Arizona and the people of America are fed up with the federal government. The bottom line is, is that they need to secure our borders. And in regards to Senate Bill 1070, what a disappointment! It hasn’t been divisive; it has united Arizona! It has united America!”

“If the federal government won’t secure the border, the State of Arizona will step in to complement federal efforts in a constitutional manner and protect the security of its citizens.”

Remember Jan?  She became famous for standing up for the AZ border as Obama was actively destroying it.  Jan Brewer is one of the most underrated politicians in the last 30 years.  Of humble beginnings, her lecture to smug Barack on the tarmac in AZ showed her courage and No BS attitude.  Self-made governor vs media created, Harvard fake educated leftist, elitist swamp tool.  She was a lightning rod at the time, painted as a racist for daring to lecture Obama.  She had more balls than most US governors right now.

We are entering an interesting, dangerous time.  It will be a time when republican governors will count more than they ever have.  As the GOP retakes the congress in the fall (assuming they can survive the attempts to steal it), as Biden’s dementia takes further hold of his addled brain, as they try to prop up Kamala as a legitimate replacement, as rule by executive order from the Obama/Rice/Klain/Jarrett cabal takes hold, republican governors will be the last line of defense against tyranny.

Apparently Ron Desantis is ready.  He sometimes hesitates, but his willingness to go to war with Disney is very encouraging.  Who knew there was special property tax and municipal administration deal going on in Orlando with Disneyland?  What an obnoxious expression of the old liberal term ‘corporate welfare’!  It never should have been in place to begin with.  In addition to provoking a gang of pedophiles, Governor DeSantis is really just implementing classic government reform.  Let Disney move out if they don’t like it.  Florida has enough growth to survive it.  Now Governor DeSantis, how about following up on some of the idle threats you have made about shipping illegals to Delaware?  See below.

Greg Abbott, another man who has seems compromised at times, is moving in the right direction.  Finishing the abandoned border wall project in his state and starting to ship illegal aliens to DC is a great start.  Governor Abbott has a long way to go but he has made a start.  4 buses?  How about 400.  Let the swamp sort it out – your citizens have had enough.

The big question we have to ask now, is where is everyone else?

Be bold.  Challenge the establishment.  Don’t take crap from anyone.  We talked about Jan Brewer.  Who else has done it?

Scott Walker of Wisconsin.  Just ask the teachers union and state bureaucrats: “The unions say ‘last hired – first fired,’, we say hire and fire based on merit. We want the best and brightest in the classroom.” That is right, Governor.

Ronald Reagan of California: on Berkley rioters:  “All of it began the first time some of you who know better…let young people think that they had the right to choose the laws they would obey as long as they were doing it in the name of social protest”.  Let’s just say Reagan didn’t start it but he ended it.

Andrew Jackson of Tennessee: “When the time for action arrives, stop thinking and go in.” And he did, regularly.

We now have the most governors, but are they ready and worthy enough to stop the Marxist onslaught ahead of us?

Kay Ivey of Alabama?  I like her.  Tough old gal.  We can count on her.  She stopped giving sh—s a while back.

Brian Kemp of Georgia?  He’ll be gone soon enough.  He is guilty of aiding and abetting election fraud.

Jim Justice of West Virginia: any man who compares his dog’s ass to the cast of view and holds it up live during a speech – well what can we say – Big Jim is a fan fave.

Mike Dewine of Ohio?  Good for business but what republican isn’t?  Can he be counted on against the leftist hoard?  Don’t know.

Glen Youngkin of Virginia: jury is out Glenn.  Don’t screw this up.

Mike Parson of Missouri : they don’t come more laid back than this guy.  Handled COVID the right way, but he’s no Eric Greitens when it comes to fighting RINO BS.

Speaking of, Eric Greiens, during his short reign before being illegally undermined by the St Louis City Attorney, a Soros dinglebery, stopped any further rioting in Ferguson by promising to put it down with state troopers.  They didn’t even try.  They knew not to screw around with the Navy Seal.  Eric – you coulda been a contender.

You get the picture folks.  Our current crop of republican governors is a mixed bag of RINOS with just a few warriors.

We need to sound off, make them uncomfortable and hold them accountable.

Here is the to do list for any republican governor who has any spine at all:

What am I missing fellow patriots?