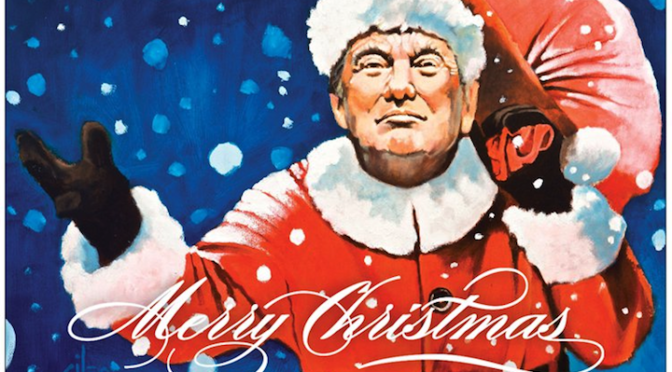 By BlackJack Pershing,  @blakjakpershing in GETTR
Dateline Christmas 2021
‘Twas the night before Christmas, when all through the Whitehouse
Not a creature was working, but Hunter was molesting a mouse
Leftist hacks camped out by the chimney with care
Screaming Never say ‘Christmas!! No no don’t you dare!!!’
The freak show cabinet were nestled all snug in their beds
While visions of transgendered athletes danced in their heads
Kamala in her kerchief and Mayor Pete in his cap
Argued over who would take over when Chinah Joe finally took a dirt nap
When out on the south lawn there arose such a clatter
Doctor Jill abandoned diaper duty to see what was the matter
Over to the windows the Whitehouse staff flew in a flash
Faster than the dems making the economy crash
When what to their wondering eyes did appear
But a bigly raised up MAGA Fourwheeler, and a crew of deplorables carrying beer
With a magnificent commander so amazing and stupendous
All knew in a moment it must be the Stable Genious
More rapid than Space Force, his supporters they came
And he joked and he heckled and called the by name
Now Marjorie!  Now Roger Stone! Now Senator Ted and Governor Ron!
On Greg Kelly! On Steve Bannon! On Mark Meadows and Junior Don!!
To the top of the Capitol, to the top of my Great Big Wall!
Now dash away dash away dash away all!
To the top of the whitehouse the MAGA truck flew
With a truckload of greatness and 45 too
And then in a twinkling they heard on the roof
Kamala was cackling as Build Back Better went ‘POOF!’
Dem heads were exploding and turning round and round
When down the chimney the greatest POTUS came with a bound
He was dressed in a power suit, from his head to his foot
And he was covered in winning, because on that he wrote the book
A sack of America First policies he flung on his back
And he looked like the best POTUS ever as he opened his pack
He got real busy, went straight to his work
Don’t wake up Sleepy Joe, he said, the perverted demented jerk!
He unpacked great policies, executive orders, & judges, with style and pomp
And a very big drill to finally drain the swamp
With wink and laying a finger aside of his nose
Giving a thumbs up, through the chimney he rose
He sprang to the MAGA truck with that dragon energy, & gave the deplorables a whistle
And away they all flew like the down of a thistle
We heard him exclaim as he drove out of sight
‘Let’s get these losers out of the White House!! Sleepy Joe bites!!!!

One thought on “‘Twas the Night Before MAGA Christmas”