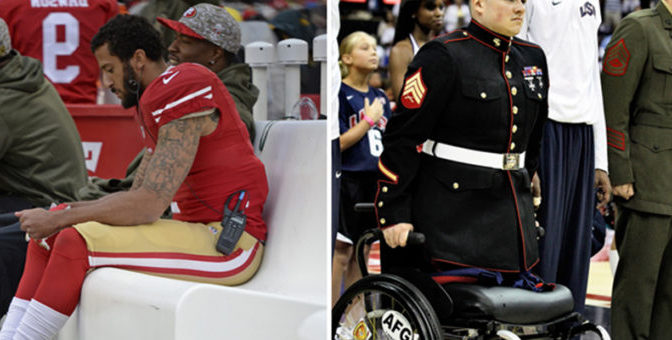 Ignorant. That’s what San Francisco 49ers 2nd string quarterback Colin Kaepernick is.   2nd string to someone who is typically referred to as “Sunshine”, the 2nd string quarterback in the movie Remember the Titans…but I digress. Colin Kaepernick has recently refused to stand and acknowledge the national anthem, which is played before every NFL pre-season, regular season and playoff game. He’s refused to do so in some sort of nonsensical opposition to how American society oppresses people of color and most specifically, our law enforcement key oppressors amongst us.

What kind of parking lot does Kaepernick park in before every practice or game? Is it a parking deck, or a regular lot? No. It’s a secure lot that requires identification in order to enter. Who secures the lot? Police and stadium contracted security. Law enforcement, paid to ensure that he and his vehicle are safe.

Who escorts the VIP players and coaches to the locker room on the field? Law enforcement. They make sure the players are not harassed, attacked or bothered and that they can make it back on the field the next week to do their jobs. Seems oppressive, Kaepernick.

Kaepernick has the opportunity to go and play a sport for a living in our free country; it would appear Life Is Good. Guess not. Our freedoms are protected by said law enforcement and the United States Military. Both organizations are at war with domestic threats and terrorists and the US Military is still fighting in Iraq and Afghanistan while the average American like Kaepernick have no idea about this because it’s not on their “socials”. Kaepernick just joined the likes of Carlos DelGado and Muhammed Ali and in doing so, he actually isolated a population of selfless people who sacrifice for the good of his well-being. Hypocrisy is his own personal oppression.

“If you don’t love it, leave it”. That’s what Merle Haggard said and he specifically calls out “the hippies in San Francisco” in the song Fightin’ Side of Me. I pledge allegiance to the Flag (and applaud Hag!). Suggestion: figure out an innovative way to bring social issues to light and don’t be bullied into a stance.  Michael Bennett learned this lesson. This may be a futile point in the near future anyway. Kaepernick, in all likelihood, will be listening to “Oh Canada” and looking at a Maple Leaf shortly on cut day. Go Argonauts!