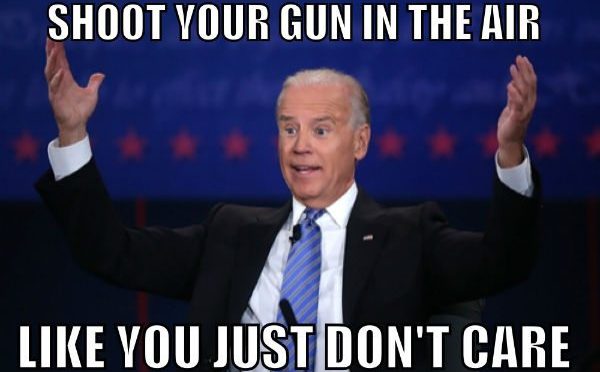 Let’s see if we can hop off the political fence for a minute and understand that retooling, revamping or even shredding the 2nd Amendment and banning firearms is utterly ridiculous.

Outlaw guns and two things will happen: First, the outlaws will be the only ones who have the guns. Remember the old ‘60s bumper sticker, “If you outlaw guns, only outlaws will have guns”? Think about it. Second, if those with murderous motivations can’t quickly get their hands on illegal black market guns, then they’ll do the job with some other weapon- maybe a hammer or club. You and I are at greater risk from an idiot armed with carpenters’ tools and a caveman’s club than an idiot with a rifle.  Fact: FBI stats consistently show that hammer and club murders outnumber rifle murders. You don’t hear Capitol Hill discussing the banning of hammers and clubs, do you?

Similarly, will obsessive, compulsive eaters stop eating if forks are banned? Probably not. They’ll find another means to satisfy their obsession to get food into their mouths, maybe with a spoon or even their hands.

Go ahead and outlaw alcoholic beverages and alcoholics will find a way to ingest alcohol, I can guarantee you on that one. And there’s lots of ways. Make it at home (remember Prohibition?), Scope, Listerine…….How about hand sanitizer? Saw that one in Afghanistan where alcohol is banned for both US troops and civilians.

So let’s consider the latest political absurdity on banning semi-automatic, so called “assault rifles”. “Assault rifle” is a made up, political term (circa 1990) designed as one of the first steps in demonizing semi-automatic rifles. The term has no definition in the world of weapons, none. And the “AR” in AR-15 does not stand for Assault Rifle, but Armalite, the company who first designed the gun.

These guns are single shot weapons, the same as a semi-auto pistol, except they look scarier and may hold more rounds with larger magazines. Just an aside- large capacity magazines (holding more than 10 rounds) are banned in 8 states. This is also an idiotic law and a waste of taxpayer dollars. The killer will either find a larger magazine illegally or simply take more magazines to the crime scene and change them out more frequently. Do you know how long it takes for a novice to change magazines? About 3 seconds. Two seconds with some practice. Listening to politicians rant about magazine size is pitiful.

Back to the so-called “assault” rifle. This rifle is not a fully automatic weapon like a machine gun, the latter of which are banned for civilian use, and should be. Fully automatic weapons are reserved for military and law enforcement use only. Semi-auto rifles fire as fast as you can pull the trigger, which is about 40 to 60 rounds per minute if you’re aiming at something. Once again, they’re like semi-auto pistols. A modern day fully automatic rifle, like the US military’s M-4, fires nearly 1,000 rounds per minute, 20 times faster than a semi-automatic rifle, or the “assault” rifle.

The semi-auto “assault” rifle, politically touted as a horror of all horrors, is an underperformer compared to a semi-auto pistol in close quarters situations. It is a fact that semi-auto pistols are as effective (more effective in my opinion) than semi-auto rifles at distances of 50 feet or less (as in schools or nightclubs). Banning the semi-automatic AR-15 or AK-47, or any other single shot rifle for that matter, is as illogical as it is unconstitutional. If we’re going to try banning semi-auto rifles, why not ban the just-as-effective semi-auto pistols as well? Again, logic is not a common theme in the halls of the US Congress. Maybe it’s because pistols just aren’t as scary looking.

What do you say we start by focusing on real, rather than phony political solutions and take appropriate actions to stop the shooters before they act- getting to the “left of the bang?” Just one recommendation is to start holding law enforcement personnel accountable for their incompetence, regardless of whether it’s FBI or local. Unfortunately, the feds are the ones missing the ball lately.

Prior to the Parkland, FL tragedy, the FBI failed to analyze and act on two specific reports about the shooter, one this past September and another as recent as January 5. This horror show most definitely could have been prevented. Of course, hindsight is 20-20, but there’s more. Our law enforcement system failed in nabbing the Boston bombers before they unleashed their attack in 2013; Russian authorities, yes, the Russians, twice warned the FBI more than a year and a half before the attack that Tamerlan Tsarnaev (one of the bombers) was a violent radical Islamist, but we missed multiple chances to detain him as he moved to and from the Russian Republic of Dagestan for terror training. In the South Carolina church shooting two years ago, FBI Director James Comey admitted that the FBI’s background-check system failed, mistakenly allowing shooter Dylan Roof to purchase the gun he used in the attack. We failed to connect the dots before the 2016 Orlando nightclub shooting, and also swung and missed in preventing or at least mitigating our very worst- the 9-11 attacks.

People make mistakes, but there have been far too many as described above. In civilian companies/corporations, this type of incompetency would result in near-immediate termination of those responsible, period. And just a side note- anyone familiar with government civilian termination procedures knows that it is incredibly hard to fire someone. Houston, we have a problem.

Let’s get off the political bandwagon and stop blaming guns, Trump or the NRA. Rather, let’s use logic, knowledge and facts to make recommendations for solutions to the problem.

One thought on “Let’s Ban the Scary-looking Guns!”