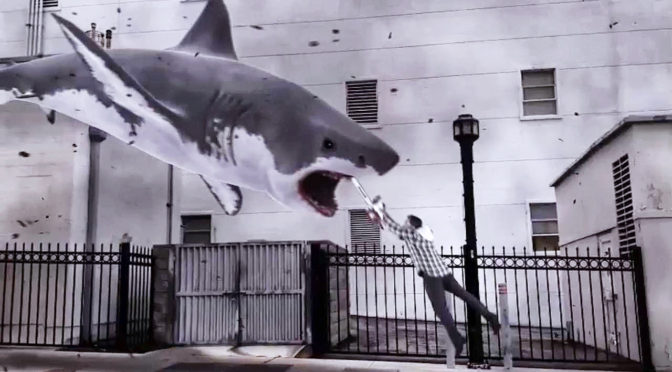 As the 115th United States Congress prepared for recess after accomplishing very little during their first eight months in office, off the coast of Maryland and Virginia a major storm is developing. Due to low pressure, low polls and a hurricane of dissatisfaction, it appears a Sharknado is about to be unleashed on the Swamp. Washington DC was last hit by a Sharknado in 2015 and the public is already blaming Congress for this new storm due to their collective failure and their resemblance of a large pool of bait instead of statesmen.

President Trump has already been evacuated to New Jersey where Governor Christie has welcomed him using the Sharknado storm to close NJ beaches again state wide, although they are not under the Sharknado storm threat. The Christie family is once again enjoying exclusive access to NJ beaches while the general public is restricted from using them. In the midst of this storm, Congresswoman Maxine Waters has blamed the Sharknado on President Trump stating on MSNBC Morning Joe, “if Trump had been impeached by now there would be no Sharknado.” Governor Christie shot back from his beach chair, “please, she’s not exactly a meteorologist. Does she reflect the wit of Joe and Mika?”

Meanwhile back in the well of Senate Chambers, Senators Schumer, Sanders and Warren are leading a protest that “shark lives matter.” They are encouraging the population to lay down their chainsaws and guns and engage the sharks in peaceful dialogue offering them fish sticks and setting up kiddie pools for them to swim in. Senator Sanders says many of his shark friends “feel the Bern” and “just want a future they can believe in.”

The forecast predicts a Sharknado in the next 48 – 96 hours. Much of the DC Swamp is evacuating. Senator Blumenthal, the Democratic Senator from Connecticut, has volunteered to help the DC National Guard maintain order, leveraging his self-proclaimed combat service in Vietnam to help deal with chaos in the fog of battle. After five deferments from Vietnam and a leadership role in the Toys for Tots program, he is well equipped to lead a convoy of non-essential government employees that need to be evacuated  to ensure their safety and future paydays. Blumenthal quickly volunteered to lead the exodus.

The 53rd Regiment continues to monitor the latest Sharknado forecast but at the moment it is projected to hit the Swamp in two days at 5:15 AM. Stay tuned …