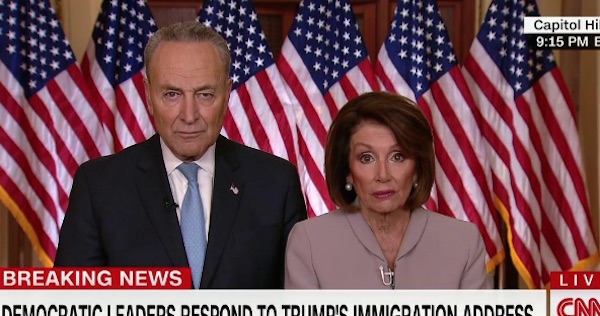 “Trump stepped into the puddle, picked up the mud and threw it back at her canceling her trip overseas. What we have here is a Muddle (mud + puddle).”

Americans are largely disgusted at the massive dysfunction of our government. This latest episode of the Pelosi-Schumer government shutdown demonstrates how the majority of elected representatives serve themselves and not the republic. The ancient, entrenched democratic party leadership led by Nancy Pelosi and Chuck Schumer are out of touch with mainstream thought and common sense Americans. Their agenda is centered on power, control and more power, America be dammed.

President Trump has stayed in Washington throughout the holidays and he has canceled several trips ready to negotiate with democratic leadership over funding for the wall and border security. The democrats have vacationed in Hawaii, Puerto Rico and planned a seven day excursion to overseas to “visit the troops.” President Trump canceled Pelosi’s boondoggle to keep her in town to negotiate (the troops wont miss the distraction either!). While on the surface picturing Pelosi & Adam Schiff exiting the shuttle bus when their trip was canceled is priceless, this was more than a tit-for-tat for Pelosi canceling the State of the Union address. President Trump put his foot down telling Pelosi stop playing games with Americans and their government. Compromise!

Border security is a real issue. One statistic alone should make funding border security and key portions of the wall a slam dunk; 300 Americans die weekly due to drug overdoses whereby 90% of drugs are coming across the southern border. That is 15,600 Americans dying a year before we ever get to illegal immigration, human trafficking, MS-13 and terrorists infiltrating across. Failure to address this issue is unforgivable and Trump gets it.

Both Pelosi and Schumer have voted for the wall and border security before, several times. So what is this about? Power, control, resistance and more power. Pelosi & Schumer are willing to let Americans suffer from government dysfunction so they can resist, secure power and undermine the President’s ability to govern. Their conduct is shameful, outrageous and unbecoming a public servant.

The President is right to stand his ground. He has been offering to meet in the middle putting American safety and security first. Reasonable people can compromise. To do less than that is unforgivable after the turmoil Pelosi & Schumer have put the country through. All of this will be remembered in 2020 and the democrats are once again demonstrating their inability to govern responsibly by legislating to the extremes. Although the mainstream media continues to attack and blame Trump for this mess, Americans proved in 2016 they see through all the lies. Democrats should think about that because while they took the House, the Republicans not only maintained the Senate, they added seats. Americans are watching and already regretting giving the democrats back the House.

The childish mud Pelosi threw at President Trump cancelling the State of the Union address landed in a puddle. Trump stepped into the puddle, picked up the mud and threw it back at her canceling her trip overseas. What we have here is a Muddle (mud + puddle). Pelosi still hasn’t learned that President Trump does some of his best work in the mud!