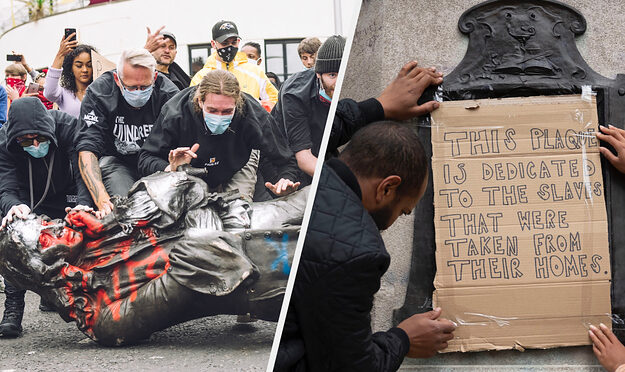 I’d rather entrust the government of the United States to the first 400 people listed in the Boston telephone directory than to the faculty of Harvard University. – William F. Buckley Jr.

Those who seek absolute power, even though they seek it to do what they regard as good, are simply demanding the right to enforce their own version of heaven on earth. And let me remind you, they are the very ones who always create the most hellish tyrannies. – Barry Goldwater

We have all known spoilers, malcontents, irritating nerds in our lives: in short those who ruin things.  The kid who reminds the teacher to give homework at the end of class, the dope on the team who causes everyone to have to run extra laps.  The little twit who tells on people.  The 2nd grader who cries and screams ‘no fair!’ over trivial things.  Leftists all.  They ruin it for the rest of us.  They are unAmerican because they don’t mind their own business.

The list of things ruined by the left is accelerating at a pace no one ever suspected.  Here is my attempt to capture some of them in order to keep a record.

Baseball: we had hoped they would not surrender, but they did.  Kneelers and worshipers of the communist front organization known as BLM are now part of MLB.  Patriots are walking away.

Football: beginning with Kapernick’s woke baloney after failing as a starting quarterback, their descent into irrelevance continues.  The NFL may not know it but they are finished.

Basketball: the NBA is now wholly owned by China.  Lebron is a hulking nitwit, obedient to his Chinese masters.  A disgrace.  Already less entertaining than college hoops and filled with fatheads, the NBA has started it’s end.

Healthcare: while they only succeeded halfway under Obama, and the question of whether President Trump can fully undo the damage is open, in the meantime their dwarfian Dr Goebbels knows as Fauci has undermined medical professionals across the country with conflicting statements and bad guidance.  The left loves him and manipulates his self importance.

Medicine: a drug of consequence has been made political: HydroxyChloroquine in combination with others, is shown to help slow the progress of the China Virus.  Due to the president recommending it, they make it a boogie man.  A doctor was recently fired for stating her views on Hydroxyxhloroquine on TV.  Leftists ruin everything.

NASCAR: the Jussie Smollett of Nascar had his 15 minutes.  He’s still not winning.  But he made his skidmark.

History: decades of trashing the US Public School system has resulted in a generation that knows little about the exceptional history of the US, and many likely believe we are evil and bad.  The history departments at most liberal arts colleges are equally as flawed and not helping the situation.  Intellectual rigor and discipline are becoming rare.

The Founding Fathers: what happened this past 4th of July?  Insane democrats trashed our history – including the demented DNC Presidential candidate.  None are considered in the context of their time – only by today’s standards.  Leftists are using the MSM to radically trash our founding.  Many are going along with it.

Statues: in their haste to erase history, they damage tributes to our most important historical figures.  Its not Antifa or BLM by the way, it’s the Democrats.  Debates about confederate anything are legitimate – but mobs tearing down anything without permission – that’s criminal.

News Reporting: well documented and on the list.  Its over.  Fox falling away now.  Will patriots have options? We hope.

Higher Education: as the opening quote suggests, most faculties at US Universities have been leftist indoctrinators since the early 1960’s.  They teach the children of those paying for the experience to hate their parents and the United States.

The Catholic Church: a pope who speaks more about global warming than saving souls says it all.  American Bishops too cowardly to condemn the attacks on the statues of St Louis and St Juniperro Serra.  Pathetic.  Just today AOC called St Damien of the Lepers a white supremacist colonizer.  We expect no defense from the cowards we call Bishops.

US Cities: all cities run by democrats for decades are plagued with corruption, poverty, failing schools, failing infrastructure, leftist ideology and lost hope.

Black Families: starting with the Great Society programs in the 1960’s, Black Families and Black Culture have been undermined by the democrats; the most heinous feature of their intentional mistreatment of the Black Community is the massive damage of the abortion trade.

Initiative: leftists and democrats hate it

Self Sufficiency: flies in the face of everything leftists are trying to accomplish

Free Speech: the left has now cultivated cancel culture with millions of democrat Karens calling employers and screaming about hate and racism to get fellow Americans fired.

Corporate America: in fear of being cancelled and other actions like boycotts, most US Companies, which run with little investor tolerance for sales variances, live in fear of being called out by the left for anything.  So – they cave and issue statements with leftist approved language each time there is a social issue being pushed by the MSM Propagandists.  Some go futher: Ben & Jerry’s Ice Cream routinely supports anti-police propaganda and whatever the Woke issue of the day is.  Thanks Unilever.

Men: as the younger generation comes of age we must ask: will what was traditionally called ‘a man’ even exist: by this we mean a male individual with freely formed opinions that exhibits traditionally masculine traits and does related masculine things.  Its up for grabs ladies and gentlemen, because the left knows they must be eliminated for their goals to be realized.

Women: the same as above but different: those lovely creatures who exhibit beauty and femininity, have children, and make most things nicer and better: the left is actively destroying gender roles and wants the nuclear family to disappear.  Women are told to despise men by the leftist prison guards self appointed ascendency – who are always quite repulsive.

Responsibility: they hate that too – they prefer dependent losers who rely on government for all of their needs.  The tent cities on the west coast are emblematic.

Tech Companies: infested with angry self-righteous leftists.  Their skills are one thing, their opinions are another.  Thank God for the Elon Musks and Peter Theils of the world, but there aren’t enough of them.

Hollywood: well documented.  A complete sick disaster from movies, to awards, to blackballing, to pedophiles, to hypocrisy – a long sad list.

The Economy: the question must be asked: is the intentional shut down of our economy, and now the ongoing attempt to keep it shut, a Democrat/China/Soros conspiracy?

Real Racism: it will forever be harder to spot, since the left has now called anyone with a dissenting opinion from theirs a racist.

Truth: out the window with these Trotskyite zealots.  Abe Lincoln and Frederick Douglas now bad?  How did we get here?  Democrats claiming documented and filmed riots are myths.  Clearly demented leaders in roles like Speaker of the House and the Democrat nominee.  Hard to imagine just a few years ago.

Law Enforcement: who saw this coming 6 months ago.  Let’s give the Stalinist Left credit for opportunism and activating their plans for anarchy and chaos so quickly.  This situation should give all of us pause.  We should be considering what has been organized right beneath our noses and how fast it came about.  Something is not right.  Look for the next round of de-urbanisation to happen in the US if this doesn’t stop sometime very soon.

Social Media: admittedly it was already broken, but what was once a ghetto of narcissists posting what they had for lunch, has turned into mostly liberals screaming about their causes and threatening others.  Its a net negative to society to say the least.

Progress on Race: Abolitionists, John Brown, Frederick Douglas, the Civil War, 600,000 dead, Reconstruction, President Grant, The Tuskegee Airmen, Buffalo Soldiers, Integration of the Military, President Eisenhower sending troops to Alabama, the Civil Rights Act, MLK, Affirmative Action, Busing, Integration, Charter Schools – on and on – to the left none of it ever happened.  There has been no progress and they will never talk about any of this.  There is only racism and if you do not agree with them – you are evil and racist.

We are just scratching the surface here folks – we’ll revisit this list every so often to update it with the latest things the left has ruined.  Please leave your thoughts below if I have missed anything.

One thought on “Leftists, Liberals and Democrats: They Ruin Everything”