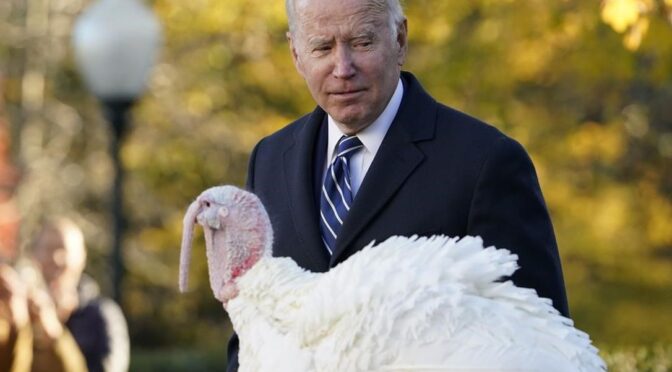 By Blackjack Pershing @Blakjakpershing on GETTR
Thanksgiving 2021
Orwell said ‘In a time of deceit, telling the truth is a revolutionary act’, we patriots, we Americans, we Christians can paraphrase that by saying ‘In a time of extreme-criminality and ingratitude, being thankful is also a revolutionary act’.
And despite our challenges, which are many in the Bidenite era, we have reasons to be thankful.
Be thankful that we know.  We all know.  For the first time we all know the extent of the malfeasance of the Stalinist Left, the democrats and their willing trained poodles in the media.  We Know.  We all know what they did in 2020.  We are not forgetting either.
Be thankful for the man who continues to call out what others will not, who continues to state the uncomfortable obvious, who continues to point out the mendacity of the RINO’s, who continues to address the fraud from the last election: Donald Trump.
Be thankful that the same man changed the national dialogue on everything, most notably China.  Trump made it clear that China was the issue.  The threat.  The main thing.   The swampian losers didn’t get it.  Still don’t.  Many remain on the China payroll.
Be thankful that the Republican Party has become the place for the worker, the honest woman and man, the deplorables of all races and creeds.  Leave the scumbag elite, the criminal takers, the swamp –  to the democrats.
Be thankful that in Virginia we see the beginning of a turnaround with the election of Youngkin and his team.
Be thankful that reasonable people are paying attention to how bad it is.
Be thankful for ‘Lets Go Brandon’, the perfect response to this garbage Commander in Chief, a diapered dilapidated doofus.  #LGB is everywhere and its glorious.
Be thankful that the tech elites could not control themselves and went too far.  They exposed themselves.  We are fortunate that new platforms are now emerging to compete with these compromised platforms and will take them down competitively by offering options for free speech that do not exist in Zuckerberg/Dorsey/Bezos/Gates/Cook’s twisted world.
To that end be especially thankful for GETTR, thus far the best non-leftist option for social media.
Be thankful for the British media, still willing report the truth, such as the addled US President’s horrid anal explosion while speaking to the Duchess of Cornwall.  “It was long and loud and impossible to ignore!’ According to their source.  Dr Jill knows and we all know.
Be thankful the end of the democrat reign of terror is within sight, if we don’t screw it up.
Be thankful that the level of depravity of the US education system is being exposed and reasonable parents are starting to intervene.  We just may be able to right the ship if we don’t back off.
Be thankful that the installed stooge in the office of the presidency continues to crap himself, literally, on the world stage.  Just ask our leftist Pope who instead of a talk on abortion, had to get a mop and bucket and clean up aisle six after Brandon had a nuclear shart that required a change of bloomers.  For an encore he went to Scotland for public nap and a big aforementioned fart at the Prince’s battle-axe.  All of this proving what we already knew.
Be thankful that the thinking moral backbone of this country is now more aligned and connected than ever – across race and creed – and that we know we are more powerful than the Stalinists when we band together.
Be thankful that we can see with absolute clarity how devious, disgusting and deliberate the elitists are about screwing over hardworking Americans.  No guessing anymore.  They have a greek chorus in Hollywood and a legion of Goebbels’ Spawn in the media.  But we know.  We all know.
Be thankful that the FBI has exposed itself for the corrupt political Brown Shirt operation it is.  Sadly the FBI has corrupt DNA, having been run by a cross dressing lunatic for decades.  J Edgar would be proud of his creation no doubt, but would probably still think Comey is a prick regardless.  With exposure comes reform or a complete shutdown in the next Trump term.
Be thankful that California has started to implode.  It needs a complete meltdown to right itself.  Sadly, liberal nimcompoops will need to be attacked personally by roving bands of maniacs before they change – and maybe not even then.  In the end it may be the Latinos in CA that save the state, as they have faith and family orientation and generally switch to the Republican Party as they achieve success.
Be thankful that the Durham Investigation continues along slowly and methodically.  Just like Michael Meyers in the Halloween movies, he may be slow, but eventually he will catch the low down corrupt hacks who created the fake Russia Hoax.
Be thankful.  Change is coming.
Be thankful that God is Great, Christ is King, the truth always comes out, and that we still live in the greatest country in human history.  All of us must work to bring the ship back on course.
Please share your own thoughts around thankfulness below.
Happy Thanksgiving –
BJP

2 thoughts on “We CAN Be Thankful During the Democrat Doomsday”