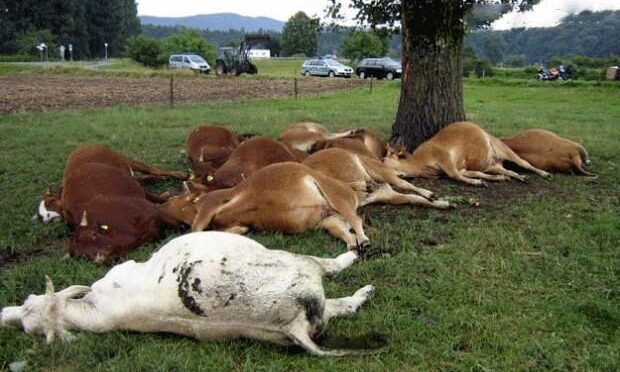 Veterans of the meat packing industry know the term ‘4D’ quite well: Dead, Diseased, Dying and Disabled.  If you are a pet owner you want to be sure you have a quality pet food that doesn’t include such ingredients.  Likewise, if you are a citizen, you want to be sure any large institution you deal with, government or otherwise, is not ‘4D’.

Well.  Bad news.  Most are 4D already, if not straight up road kill.

As we all know, the FBI is now a political enforcement arm of the DNC and entrenched federal bureaucracy.   All threats to entrenched DC interests, especially those of democrats, are referred to the FBI for persecution.  While not as advanced in their tactics as the Gestapo, the Stasi or KGB, they are working on it.  False Flags, embedded shit disturbers in legal protests (sometimes even partnering with Antifa), setting up unwitting conservatives for prosecution on technicalities, leaking arrest dates and times to favored media outlets – all of this is now part of the day to day activity of the FBI.  We used to try to defend the rank and file agents.  That’s getting harder.

Sad.  Pathetic.  Weak.  Words that describe republican or allegedly conservative leaders of the DOJ.  Criminal.  Subversive.  Seditionist.  Words that the describe the current leadership of the DOJ.  The weasel currently in charge has gone on record against parents in local communities having a say in their children’s education.  The DOJ under Obama was directly involved in the fake Russia hoax.  It will all be revealed.  The DOJ hasn’t upheld the nation’s laws in decades.

Once meant to be professional in its pursuit of a safe interior of the US, free of terrorist incidents, it is now a wing of the democrat party; an open borders garbage dump.  When the next major domestic terror incident occurs, you can thank so called Secretary Majorkas, the most incompetent cue ball in a government of incompetents.  One must ask what the value of this large collection of agencies is.

According to Fox News, Gen. Mark Milley, Chairman of the Joint Chiefs of Staff, reportedly told lawmakers during closed-door briefings that if a full-scale Russian invasion of Ukraine takes place, then Kyiv could fall within 72 hours.

Incompetence of the GO Corps started in the W Bush administration, when those obviously qualified to win wars were not allowed to win them.

Politicization of the GO Corps started under Obama and continues.  Competence was long ago thrown out, made a brief reappearance under Trump, and is now out again.  Being Woke matters.  Losing and getting people killed?  Doesn’t matter.  Epic failure is now ok.  Think about how many of these political asshat Generals criticized Trump for every question he asked, every initiative he began.  In the end they all were wrong.  Some of their buffoonery is listed in other articles on this site.  Now that they are working for a demented democrat?  No signed letters.  No protests.  No public protests.  Just going along to get along and getting our people killed, our nation humiliated, and our future in serious doubt.  The GO Corps needs a ‘general’ flushing.  Zero won wars in 20 years, and the Afghanistan disaster are their legacy.  Take your stars and shove em, fellas.

Fauci.  He represents the enormity of the problem.

Headquarters of the daily clown show, run by vicious partisans that knowingly panic and manipulate the public.  Over time they grow more bold.  Low ratings don’t stop them.  They intermarry with politicians.  They mix careers with political operatives.  There is zero ethical control.  Conflicts of interest are normal.  Lying is an art form.  Disruptors are growing.  Not fast enough.  Lazy viewers tolerate what they know to be lazy, poorly produced, anti-intellectual garbage.

Weak.  Scared.  Buffoonish.  Poorly educated.  Unaware.  Unthoughtful.  Reactive.  Juvenile.  Short term.  Idiotic.  Some of the words that describe the kind of leaders that mandate critical race theory training to employees, give money to corrupt pseudo-communist gangsters like BLM, fight state governments like Florida, which is trying to keep filth out of schools, and so on.  All because a loud hyper vocal minority threaten to cancel them if they do not do what they want.  We are way past the days of dignified corporate titans trying to do what is best for their employees and stake holders.  We have some, but the lion’s share of attention is given to the idiots.

We all know China has threaded itself through all of our institutions.  Chinese money and corrupt influence exists in all of them.  We all know.

As noted on these pages before, an aggressive de-centralization of the Washington DC apparatus is urgently needed.  Disperse all federal assets among the 50 states.  Institute radical ethical reform of all agencies.  Disband some agencies.  Fire all the officers above 2 star General in the military.  Trump knows he must do this.  He cannot talk about it publicly.  But its coming.

Much more to discuss on this topic, fellow patriots.  I’ve listed the big targets.  There are many more.  What will we do?