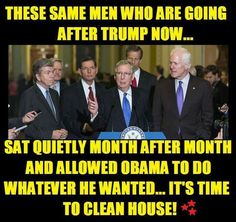 So Trump says he’s not ready for a Paul Ryan redo, won’t support John McCain or Kelly Ayotte. All three of these special interest career politicians are defined by more than a few as Republican club elites, and in my opinion, all three are just that. They, like many others, need to go- we know it and Trump knows it. He’s showing strong indicators he’s setting the stage to clean house if elected President.

In Trump’s mind, political service should not be a career that goes on and on for 40 years, maybe not even 10. Rather, one should take on the role as civil servant, perform the best one possibly can, then move out smartly and find a career. In addition, if you’re tapping signals by either criticizing or not supporting Donald, then you had best get out of the huddle, have a seat on the bench and just get the heck out of the way. The Trump way is, “If you’re not with me, then you’re against me”- it’s that simple. And that’s why Ryan, McCain and Ayotte are not on Trump’s Christmas card list.

Trump’s engine runs on logic and tough standards, not emotion and feel-good politics. And if you don’t meet those standards it would be best to get off the field and watch the game from the sidelines. Whether it’s business, politics, military operations or sports, success is only achieved by accomplishing tough standards. Trump’s bottom line is standards, and if you can’t get it done then try your luck somewhere else.

It’s clear Trump’s building a team of fighters who are anything but politically correct. Enter General (Ret) Mike Flynn, Newt Gingrich, AL West, Chris Christie, Trey Gowdy, Rudi Guiliani, Sarah Palin and Ben Carson to name a few. We need leaders, not pals. We need decision makers, not consensus builders. And we need a bull dog-like fighter who can come off the ropes swinging against any bully anywhere on the planet- we need a tough guy like Trump.

Trump will continue to counterpunch anyone taking a swipe at him. Some call it thin-skinned. I call it protecting home plate, your turf, the family. Trump’s hit list will expand, and you can take that to the bank. Building his dream team is key to a successful presidency, and selecting his tough, loyal fighters will get him and the Country on the right track . Donald J. Trump may be a loud mouth New Yorker, but he’s our kind of loud mouth New Yorker. Get the mops and brooms– it’s time to clean the house because it sure is filthy!

3 thoughts on “Clean the House!”