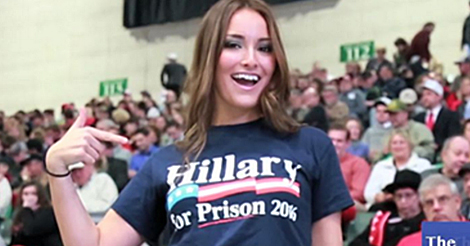 Hillary Clinton is an unindicted felon. She is a criminal, a liar and a self-serving politician of the worse magnitude. Putting a bumper sticker on your car or claiming “I’m with her” is the badge of an idiot! Actually, you’re a traitor voting for a person who compromised the security of our country through intentional neglect of classification rules or personal convenience. Surprise, surprise, the Obama White House and the post Holder, and  Loretta Lynch DoJ influenced the FBI finding to characterize her actions as “extremely careless.” You and I – average American — We’d be in jail without hesitation. We are NOT stupid but they play us for fools!

Americans need to think broadly about this election. Ultimately, this election is NOT about Clinton vs. Trump. This election is about the Status Quo vs. Change! A vote for Hillary Clinton is a vote for the status quo; more trade deals that sell out the American worker, more leftists’ policies that undermine American industry and force companies to move oversees and more military weakness that undermines US alliances and showcases the Obama policy of Apology & Ineptitude.

There is a lot NOT to like about Trump, but one thing is clear, HE will put America First without apology! Is this simple fact not refreshing? He will advocate for American workers and businesses at every turn. How did we EVER get to the point where this has not been the case? But we all know, our government leadership has been selling us out for decades; Most Favored Nation Status with China; NAFTA with Mexico and now a new treaty with Pacific Rim countries That Obama & Clinton are pushing? How exactly does the American worker compete and benefit from deals that guarantee lower wages? Exactly, they don’t! Wall Street benefits but the rest of us get screwed! Part of the Clinton plan. Come on, wake-up!!! Hold her accountable for her lies, ignorance and selling out your fellow Americans! She is in debt from all her Wall Street speeches and Trump is hated because he has told Wall Street to take a hike! Refreshing!!

Our political system needs an Enema, Colon Blow II!!! Trump is the vehicle, the cause, the patriot to blow up the pricks that have been profiting from the government teet while the rest of us toil to provide for our families, pass on the American dream to our children and remain steadfast in our constitutional principles.

Don’t settle!!! Don’t settle!! If you can’t vote for Trump, Do Not VOTE for the most unprincipled self-serving sloth ever elected to run for President! This is NOT about the first women President, this is about reversing the dramatic decline of America and Making America Great Again!! we need a Change Agent, DJT is that candidate!