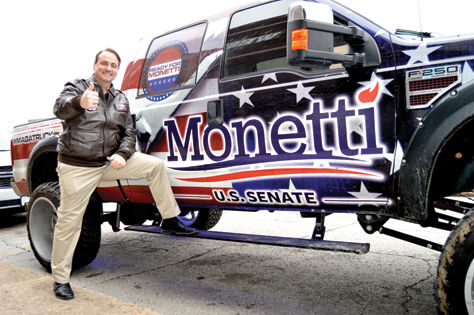 Regiment, Attention! Regarding the senate race in Missouri, the 53rd Regiment proudly endorses a candidate that will not be bought and sold. A candidate that has been tested through the trials, tribulations and selfless acts of bravery wearing the proud uniform of the United States Air Force. A candidate that fully embraces President Trump’s bold leadership  and an unwavering commitment to the forgotten men and women of Missouri that have been crushed by the liberal elitist Claire McCaskill policies and here ilk. Change has been needed for over a decade and it is time to send McCaskill back to her K Street, Midtown Manhattan and upper society millionaire peers. She is not Missouri! Tony Monetti is and always has been the spirit of St. Louis and Missouri!

It is time for the other republican candidates to clear the flight deck. The B2 Bomber is our candidate. He understands the challenges ahead. He has no fear. He was the clear winner in last night’s debate by two touchdowns, not even close. Tony is use to dropping big payloads on target.  McCaskill is a very BIG target, oversized liberal that has never truly represented Missouri.

Hawley is establishment through and through. He’s got the old republican money coming in. Mitch McConnell loves Hawley. Good for him! Monetti has the people’s money coming in … $5, $10, $25 bucks! Grassroots. Aren’t we sick of the big money, big phony, big party types?

This is what Missouri needs to know — The 53rd Regiment is lining up with LTC(R) Tony Monetti. A man brave enough to get in the cockpit of a B2 aircraft with a nuclear payload, has the guts, smarts and steadiness to lead in the United States Senate and he will proudly play his position supporting President Trump. It is time to execute Colon Blow on sad sack Claire McCaskill.

The 53rd Regiment proudly endorses the next United States Senator from the great state of Missouri, LTC(R) Tony Monetti.