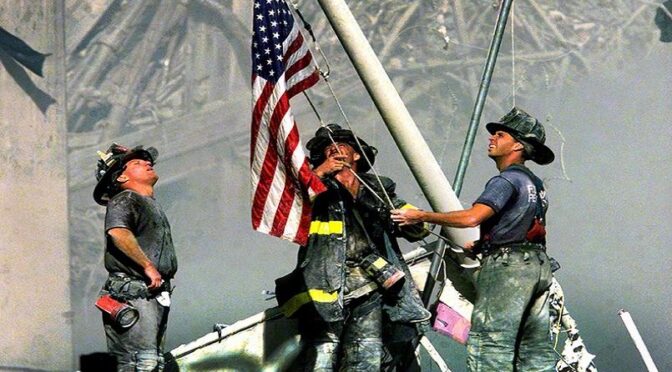 This flag crossed the Delaware River Christmas night 1776 with Washington conducting a surprise attack against British forces in Trenton defeating them.

This flag was carried by Union Army forces in the Civil War during numerous battles to preserve America, defeat Confederate forces and end slavery.

This flag was planted on Iwo Jima by six United States Marines raising the U.S. flag atop Mount Suribachi during the Battle of Iwo Jima in the final stages of the Pacific War.

This flag has been carried into space by numerous US Astronauts and planted on the Moon by Neil Armstrong “as one step for man and one huge step for mankind.”

This flag was raised after the attacks of September 11th 2001 that included attacks at the World Trade Center NY, the Pentagon and Stonycreek Township, Pennsylvania where a group of American patriots engaged terrorists with one simple command. “Let’s roll,” knowing they would likely die in the attack but preventing the aircraft from hitting the halls of Congress.

This flag has served as a symbol of hope as it does today in Hong Kong; freed countless people around the world persecuted by tyrannical governments; and helped millions of people be free.

This flag has been carried to feed the hungry, free the oppressed and help people when natural disasters have struck.

This flag leads with humility, does not conquer. This flag loves does not hate. This flag  is proudly displayed in houses of worship and respects and loves one true God.

This flag stands for liberty, justice and the American way of life.

The fact that this flag is under assault today by ignorant masses kneeling during the national anthem that includes leftists & democrats; , professional athletes; professional leagues such as MLB, NFL & NBA; ANTIFA; and some US government congressional members does not weaken our flag. It highlights to all  Americans that our greatest threat to the American way of life is ignorance and a lack of appreciation for the blessing of America and the majestic course of liberty our Founding Fathers put this country on. This flag reminds us America is worth fighting for. I stand. I will always stand.