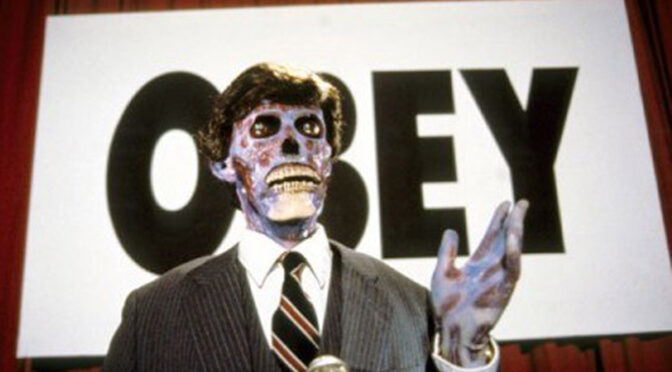 The Biden Administration: We’ll tell you what to think and how to think. #Obey!

The keystone pipeline will be shutdown. There will be no permits for oil and natural gas drilling. You will use green energy. High gas prices are good. #Obey!

The Afghanistan pull out was a perfect success. Getting Americans and Afghans killed, leaving thousand of them behind and $87 billion worth of American equipment left in Afghanistan was always part of the plan. #Obey!

The Hunter Biden Laptop from Hell is Russian disinformation. 50 career Intelligence officers including generals and career politicians said so. The media said so. #Obey!

Although all the evidence of the coronavirus 100% points to it originating from Wuhan, China, no it didn’t, #Obey!

Government schools exist to teach kids what to think, not how to think. #Obey!

Of course Big Tech (YouTube, Google, Facebook, Apple, Amazon, Twitter) decides what you are allowed to see, say and what not to say. Of course they will censor you. #Obey!

The mainstream media makes the news you need to see or read. They know what is important. Listen to CNN, MSNBC, network news and read the NY Times, Washington Post and Politico. #Obey!

Kneel during the national anthem. Black Lives Matter. Antifa is an idea. #Obey!

January 6th was an insurrection. Insurrectionists deserve no rights. #Obey!

Biden received 81 million votes campaigning from the basement. Biden’s crowds  during the campaign were measured in handfuls. Trump’s crowds were measured in the tens of thousands. Biden won the election. #Obey!

There was no election fraud in Atlanta, Detroit, Milwaukee, Philadelphia and Phoenix. More ballots were received than mailed out. Facebook ballot drop boxes and poll workers stuffed ballots and 2,000 mules did what was necessary to win. There was no fraud. #Obey

There is no inflation. Prices are not high. #Obey!

There is no illegal immigration. Open borders are good. #Obey!