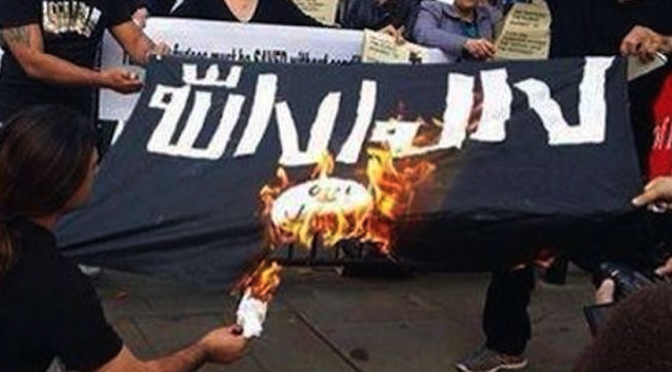 The Islamic Sick Imbecile Society (ISIS) is growing. Let’s just refer to them as Imbeciles for short, or perhaps the JV Team as President Obama refers to them. Their message of hate, Islamic extremism and cowardice is somehow attractive and appealing to the feeble minded Muslim intolerant community along with other losers. ISIS rages against freedom, women that dare go in public not wearing a burka or Christians that are faithful to God. These are but a few of ISIS’s grievances against civil society and for these “crimes” they rage war against innocents – children, women and elderly.

The formerly named Islamic State of Iraq and Syria, and newly minted corrected name of Team Imbecile, offers poor living conditions, 72 mythical virgins and a lifetime of moral depravity, self loathing and a one way ticket to hell. But yet, somehow Team Imbecile is attracting westerners to join them? Why?

The tactics of the Imbeciles are barbaric. They sever heads with knives and swords; they rape innocents including children and then shoot them in front of their parents; they compel young men to fight with them or they kill them; they persecute Christians and force Christian women into being sex slaves for their coward force of jihad’s; they strap bombs on innocents and force them to blow themselves up in suicide attacks against other innocents; they talk other imbeciles into blowing themselves up in the name of their god. Let’s pause at that thought a minute — so their god is happy that they took innocent lives killing themselves along the way? Sounds more like the devil to me!

Yeah, these jackasses really have a lot to offer and I find it hard to fathom that the Unites States of America can’t counter what these geniuses are selling. So what we have established here is that 1600 Pennsylvania Avenue lacks imagination, lacks the will to fight and lacks credibility when it comes to countering the Imbecile message. We have a Commander-in-Chief that telegraphs US military strategy and is resistant to putting “boots on the ground.” But yet we have boots on the ground back in Iraq (close to ~5K service members that is not being reported in the news) because he withdrew boots on the ground prematurely after we achieved victory in Iraq (… and the US news media fails to point this out too). This single action led to the creation of the Islamic Sick Imbecile Society (ISIS), made up of former Al Qaeda, terrorist affiliates and other low life’s recruited from despot situations and Imams driving hate.

I leave you with this thought to ponder from one of our great presidents who understood the promise of America, his duty to his country and his commitment to the next generation of Americans:

“Freedom is never more than one generation away from extinction. We didn’t pass it to our children in the bloodstream. It must be fought for, protected, and handed on for them to do the same, or one day we will spend our sunset years telling our children and our children’s children what it was once like in the United States where men were free.”– Ronald Reagan

One thought on “Cowards Burn in Hell”