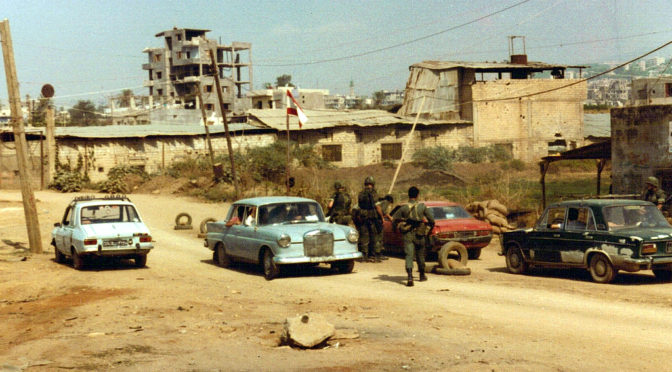 Yesteday, I had a bunch of Marines who served with me years ago contact me via Facebook.

These were guys I led in the very early 80s and called me Lieutenant. I was a tank platoon commander and they were my Marines. They were a great group of young men, Marines who like me were probably not as mature as we would be after our “float” across the pond, a float which would take us to Grenada and Beirut. Chatting with a few of them recently brought back memories of how proud I was of each and every one of them … then, as now.   We entered the crucible of combat and experienced pretty much everything that went with it.

Those chats reminded me of the importance of something I remember each year at this time of year, one particular event from decades ago.

One late afternoon on a non-descript January afternoon in 1984, things began to heat up and I took a section of tanks from our maintenance area to our firing positions east of the Beirut airport. I recall rounding a curve and making a quick decision to head to the right firing position which would mean the trailing tank led by Lance Corporal Rich Delgado to take the position to my left.

As we were turning into our positions, we drove into a barrage of either 122 or 152 mm rockets. Both of us were heads up out of the turret as all hell broke loose.

As we settled into our firing positions I got the call on the radio, “Delgado is hit, we need doc”. A piece of shrapnel nailed him in the neck as we were getting into firing position.

I made a medevac call and my doc (corpsman) and one of his buddies (another doc) ran from an adjacent bunker about 125 yards away to Delgado’s tank. Both got knocked down at least once with more incoming rockets, but both got to his tank unscathed. The docs got him stable and were able to medevac out of there in an Amtrak.  Later that night we heard Rich was stable on the USS Tripoli. The next day I got the word he was evacuated to Germany.

I saw Rich Delgado once more when we got back and were all at Camp Lejeune. He was still hurting and was going to be discharged.   I was so happy to see him and glad to see him. He was a Lance Corporal, an E-3, who was given a tank and three other Marines to lead … he was a solid leader, great Marine, and a great person.

Three or four years later, it doesn’t matter, I was a tank company commander at 29 Palms California and I ran into to my tank mechanic, Pollard, from that float years before. I was now a Captain and my Pollard now a sergeant. He asked me if I heard about “Delgado”.   Not knowing, I asked what he knew.

Sgt Pollard told me that Rich had passed a few years previously when undergoing surgery to repair the damage to his neck that January day in 1984.   Not knowing what to say, I recall feeling very sad and a bit hollow.

This Memorial Day, lift a glass and say a prayer for all of the Rich Delgado out there. I know I will, just as I have these past 30 plus years.

By the way, the event I recall from decades ago wasn’t the firefight in January ’84, it was learning of Rich Delgado’s passing.