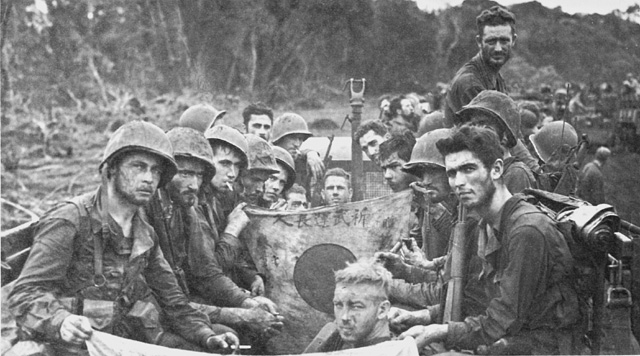 It’s 0447 hours here in Northwestern Massachusetts and as I look across the street I see the lights on in the dwelling of a silent hero.

Don is an old “China Marine”. He enlisted in the Corps in 1937 with duty on the Asian Mainland.

His enlistment should have been up in December of 1941 and then Pearl Harbor. All were told that their enlistments would be extended indefinitely.

Throughout the next 4 years Don slugged through campaigns in the Pacific on islands with the infamous names recorded in the annals of the Corps: Bougainville, Guam and Iwo Jima all with the 3rd Marine Division.

Don returned to his hometown in 1945 and went to work immediately. Met a woman and married her and raised his children. Still ever the duty bound man, he served with the town’s volunteer fire department and forest wardens until time caught up.

I came to know him probably at some point in the 70s. And as fate would have it, I moved in across the street from him the early 80s. Strange that 34 years have passed so quickly.

To say that I have been in awe of this man seems so inadequate. I have observed him through this many years do things that a man half his age couldn’t accomplish.

You see, Don will be 96 next month. Here is someone who has cut his grass, shoveled snow and so many tasks I can’t recall. And he still does! When the humidity is so high that even nature’s creatures don’t stir, he cuts the grass fully clothed. When the wind chill would scare an Eskimo, the snow is removed. And not uncommon for him to use his snow blower to help much younger neighbors.

He stands tall and straight. His hearing and eyesight remain intact. Ah, he still has a full set of his own teeth. Amazing!

There is the common denominator that we possess, that being MARINE. It is a bond that never leaves us. No matter the era from which we rose.

A common greeting is, “Do ya think we still could make it through Parris Island?” And the chuckles come.

I look at him and think that he is 5 years my dad’s senior, also a WWII man.

Don gave up his driver’s license a few months ago, as he said, “It’s time.” Now I observe him after he cuts his grass sitting in the backyard in a chair looking at the sky. I can only imagine the thoughts.

Don doesn’t ask much, but every now and then I bring him a package of Oreos, an enjoyment of his. It seems so small and insignificant for someone of his stature. But it brings a smile and a thank you.

On the holidays that are appropriate for the display, I put out my Marine Corps flag and then watch across the street, sure enough, Don follows suit.

Someday Don will enter Valhalla and the Valkyries will bring him the nightly feast joined by and in brotherhood by all other warriors.

I salute you, Don. Semper Fi! And God bless you and America.