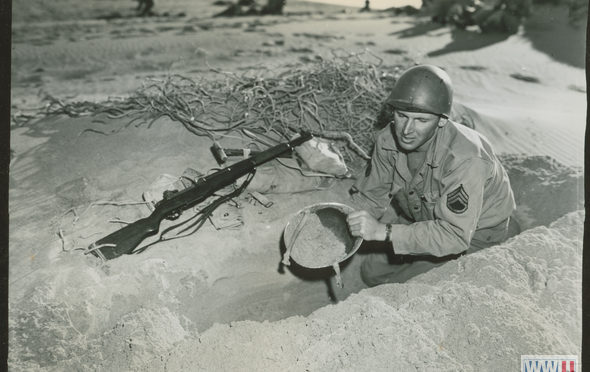 As they came of age between 1940 and 1943, the five Smith brothers left their town in Indiana for places that most had never heard of. They volunteered to jump out of planes, crouch in machine gun nests and ride in plywood gliders. They survived diphtheria and gunshot wounds, burrowing into the earth or under trucks at night so they could sleep through the shelling. Their family had nothing but hope and prayers to bring them home. And one by one, the five Smith brothers, dozens of war decorations among them, came home – exhausted but whole. All five brothers lived long into retirement and all but one is living today today. A 4th brother, Kenneth “Kenny” Ray Smith, died on 1 April 2016 in Washington, Indiana at the age of 92.

Kenny’s story is unique. With the advent of World War II, he volunteered to serve the Army and our Nation. He was a 75mm Howitzer Sergeant assigned to the 681st Glider Field Artillery Battalion and attached to 82nd Airborne Division. He fought and survived behind the front lines in Sicily, Normandy and Holland. He served also in North Africa, Italy, France, Bulgaria and Germany. He earned six European-African-Middle Eastern Campaign Medals with six bronze stars and one bronze arrowhead. After returning home from the war he married and raised four sons in Southern Indiana.

Kenny fought at Normandy, one of the bloodiest battles of the 20th century. Just before D-Day, he sent a telegram to his mom, saying, “Mother, pray for us boys, we need God now.” Later, Kenny described his task on D-Day as a “suicide mission”. Remarkably, Kenny’s plywood-and-canvas glider (AKA flying coffin) landed “successfully” by crashing into a tree, ripping through the branches as the nose hit the dirt. Unconscious for the next several hours and separated from his crew, Kenny linked up positively with his team later the next day.

Surviving six campaigns in WWII and earning a bronze arrowhead for a combat glider landing requires trust in God and discipline. I visited with Kenny last summer and asked him simply, “how did you survive?” Without hesitation, the old Soldier responded, “I always dug a foxhole.” Standing tall at 6 feet, 8 inches – digging a foxhole to standard was not a quick easy task for Kenny. He jokingly added, “one or two Soldiers always ended up in my foxhole with me because they lacked the discipline to dig their own day after day in combat”. Kenny’s “foxhole” message is both simple and genius. “Always improve your foxhole” is one of the first orders I received as an Infantry enlisted Soldier in training. It was my honor to share Kenny’s message with the Soldiers assigned to my Battalion a few weeks ago, his message was received well by the entire formation. The key task assigned to the Nation’s current generation of Soldiers is simple —– improve your foxhole and deliver RESULTS that benefit the Nation, our Army’s Mission, our Soldiers and their Families.