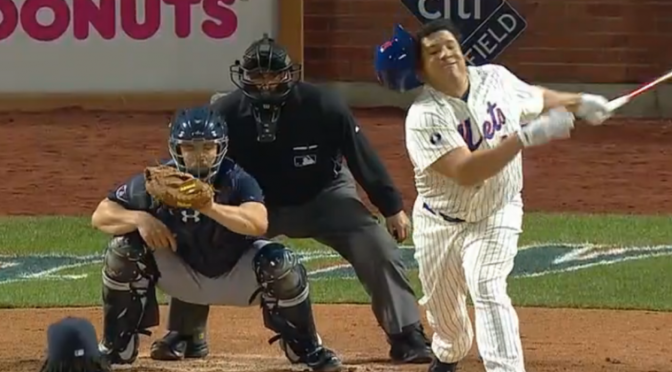 SAN DIEGO — Leave it to the fan who caught the Bartolo Colon home-run ball to put it all in perspective.

“Bartolo is a true athlete,” Jimmy Zurn, 35, told The Post on Saturday night at Petco Park during the Mets’ 6-3 win over the Padres. “Anyone who can crush a plate of nachos and crush a baseball like that has to be an athlete.”

Zurn knows athletes. He is the baseball coach at La Mirada High School in Southern California, and best of all for Colon and the Mets, he is a Mets fan.

When a trade was offered for the baseball, he told officials: “The only thing I want is for the Mets to win a world championship. Win the World Series and I will be happy.’’

Zurn happily gave the ball to those officials, who sent it to the Mets’ clubhouse and Colon as the game was going on — but not before Zurn got some terrific cell phone shots, including his 5-year-old son, Ryan, with the ball.

In that picture, you can see the love of the game.

Jimmy and his wife, Sarah, are heading to the Subway Series later this season, so you know the Mets will work out some kind of deal, a package is on the way. Zurn is a David Wright fan, and after the game, the family met the Mets, including Wright.

The Amazing Bartolo Colon brings out the best in baseball fans, doesn’t he?

It’s only fitting Colon’s second-inning blast over the fence in the left-field corner landed in the seat of a Mets fan who was at the game with his wife and their sons, Ryan and Ben, 3.

“My parents are from Buffalo,” Zurn said, explaining how he became a Mets fan.

Colon’s shot off a 1-1 fastball from James Shields was a two-run blast and put the Mets ahead 4-0.

Noted Wright: “You never know what you are going to see at a game … tonight we saw it.”

Said Jacob deGrom of the home run: “It was the greatest thing I ever saw.”

I have been lucky enough to be in the ballpark for the Kirk Gibson home run, the Joe Carter home run — two World Series classics — the Aaron Boone home run against the Red Sox and now the Colon home run.

They all were amazing. This was the most surprising.

Colon had gone 246 plate appearances in the majors without a home run. In his 226th career at-bat, he lined a fastball over the fence at Petco Park.

Colon gave up a three-run home run to Jon Jay, but no big deal, that only made his home run the game-winning shot. And so it goes.

Bart knows excitement. It took him 30.6 seconds to round the bases. When he got to the dugout, the Mets players were up the runway, so Colon arrived at a player-less dugout.

He went along with the joke, went to the far end of the dugout, and soon his teammates were jumping for joy. The old guy brings out the kid in everyone. He called the home run the “biggest moment of my career.”

As for getting the ball back, Colon said of the Zurn family, “It is a beautiful thing they did.”

Colon is a baseball gift. As he came off the field with two outs in the seventh, twice Colon paused and turned his head to look into that left-field corner.

Perhaps he wanted to get one more look at the spot where his home run landed, perhaps he was just checking the scoreboard, but the round mound of baseball was walking off with a lead after hitting a home run for the first time in his career.

“Put them all in the same sentence,” Terry Collins joked of his home-run hitters.

It was quite the night for all Mets fans — one Colon and the Zurn family will never forget.