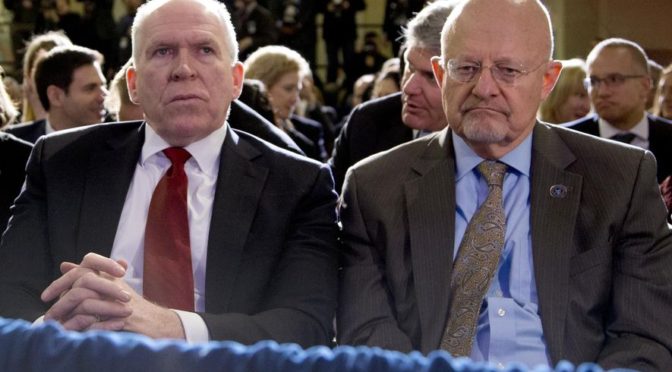 Many new revelations since this article was originally published. What have we learned?

This should scare all Americans. The Democratic National Committee and the Clinton Campaign hired a former British spy to create a phony dossier against President Trump fabricating Russian collusion that alleges salacious activities that ranged from criminal to deviant in nature. This dossier was then used by senior officials in the Intelligence Community (IC), likely senior officials under DNI Clapper or CIA Director Brennan, to get a FISA (Foreign Intelligence Surveillance Act) warrant, a “wire tap,” to collect information on Trump and his campaign. So it is highly likely one of these two helped justify the phony dossier.

The fake news has reported the dossier as opposition research but when you use a foreign agent and unknown paid resources by a for profit company, Fusion GPS, to justify a FISA warrant to a US court the whole system of checks and balances has been corrupted. The first question by the FBI should have been, “Wait, you are justifying a FISA warrant off of a foreign agent paid for by a political campaign and unverified third party sources?” Of course this is what America came to expect from the professionalism of the FBI and IC. Of course this is before we learned the wife of a senior FBI official worked for Fusion GPS; or the wife of the #2 FBI official under Comey received $400K in campaign donations from the Clinton campaign; or the two senior FBI officials assigned to investigate the Trump campaign were texting bias and hatred toward Trump as they built their case and carried on an affair. The question highlighted above was never asked because of extreme bias and prejudice of senior FBI officials. Comey’s FBI became a political pawn for the Obama Administration, the Department of Justice and the political hacks that masqueraded as professionals.

Furthermore, DNI Clapper and CIA Brennan grossly failed to do their due diligence in the matter as it appears  they supported the political aim to destroy Trump before he became president. How do I know this? Ultimately, I do not but I’m reading the puzzle pieces like many IC professionals do as part of their jobs, putting them all together. Real Intel professionals don’t tweet policy positions or more anti-Trump rhetoric after they leave the agency like Brennan does regularly. Real Intel professionals don’t take a position on CNN to broadcast more Trump hate to fulfill the fake news agenda like LTG (R) Clapper does. We have a serious crisis in our government and at least three departments have likely been corrupted by highly politicized “leaders” that allowed themselves to be corrupted.

There is much more to cover on this matter. You can take a modicum of comfort that 53rd Regiment is covering this issue but as you likely suspect, the Deep State is covering tracks and destroying evidence each passing day. Stay tuned. 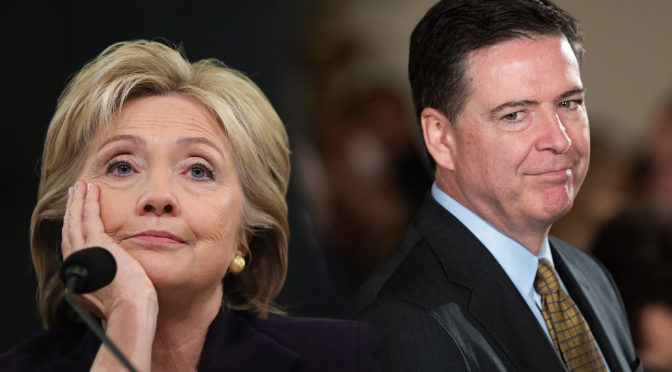 Former FBI Director Comey will be teaching a class on Ethical Leadership at the College of William & Mary (W&M) in the DC branch campus come this fall. This is very interesting since many of the issues associated with the Hilliary Clinton Email scandal; or the  Democratic National Committe  paying a former British spy to build a phony dossier with Russian sources he never met against Trump;  and the alleged collusion of Trump with the Russians helping his campaign. None of this is settled and one might say the Comey legacy is on fire and his reputation is in tatters. Regardless of facts or outcomes, leftist universities have an agenda to preach and a “left, left, left” cadence to keep as they instruct their students to march hard left. Education is no longer about teaching students to think critically or for themselves, it is about grooming the next generation of progressive democratic voters. Oh, and did we mention, Director Comey is a W&M graduate. Left, left, left, right, left.

Upon being announced for the orchestrated privilege of teaching at W&M, Comey said,”I am thrilled to have the chance to engage with William & Mary students about a vital topic — ethical leadership. Ethical leaders lead by seeing above the short term, above the urgent or the partisan, and with a higher loyalty to lasting values, most importantly to the truth.”

While W&M may be helping to rebuild Comey’s reputation while he also passes their leftist anti-Trump test, Mr. Comey has acted far from ethical. This whole episode is actually very sad and a complete joke. It is very sad to see that the FBI has lost the trust and confidence of the American people. But we must also be very clear, Mr Comey presided over this. Mr. Comey created this mess. It is just too bad he failed the ethical leadership test.