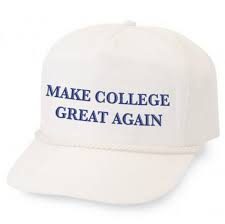 College costs have become luxurious for the average American family. Something has to give. It is time to Make College Great Again by making it affordable. First, a few facts:

College, what is in a name?

Apparently, quite a bit … colleges have successfully changed the terms of the deal teaching their student base it is OK to go into debt, cheer for their college sports teams and “don’t worry, be happy.” Colleges are in the business of the here and now and student debt is not their problem … it’s the students problem, and their parents problem that co-signed the loans. They won’t send us the student’s grades but they have no problem sending us the semester bills. They are adults and have a right to privacy except when it comes to paying their debt.

Where is this heading?

Well, Bernie Sanders would have American taxpayers paying for college making it free for all. Well, with the US already $18 Trillion in debt with Obama doubling the national debt in seven years time, we’ve already reached Margaret Thatcher’s famous quote, “The problem with socialism is that you eventually run out of other people’s money.”

Do the math. Average household income vs. annual cost of college is a train wreck already. College attendance has begun to drop. College today is for the top 65%ers and dropping. How low will it go? What school is going to drop the current price model and use market forces to reduce the cost of school? Some online schools have begun this effort but cost is still high. Competitive forces are needed along with families and students pushing back by walking away from routine college tuition and charges. Find alternative, innovative approaches. This is coming.

Scholarships are part of the equation but what is really needed is market forces to help reduce cost. When students stop applying in sizable numbers, rates will drop, universities will be forced to reduce costs. This bubble is coming … do the math! Make College Great Again!