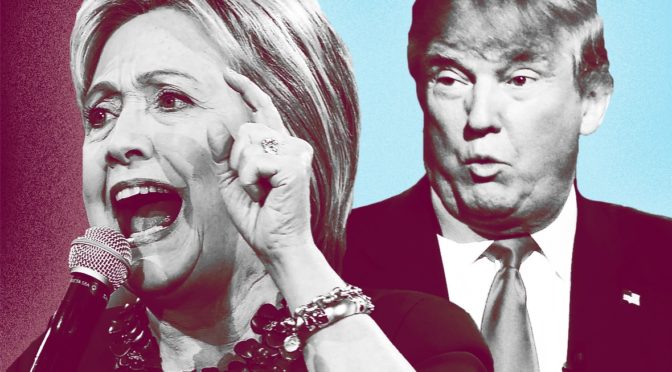 The stage is almost set; this year’s Presidential election is going to be one Tough Mudder! Trump vs. the Clinton Machine. The political outsider vs. the ultimate insider. Ali vs. Frazier. This 50 state mud slinging obstacle course is going to drag discourse down to a new low. In 2012, Team Obama perfected the art of labeling and striking early slinging mud all over Romney that he could never get off. The label of rich, unsympathetic corporate executive that screwed the little guy and fired workers stuck. Team Romney really never knew how to respond, failed to rally his base of supporters and the candidate was not willing to throw mud back. In the end, Romney got “schlonged.”

Trump, the political neophyte, made mincemeat of 16 competitors in the Republican primary that consisted of Governors, Senators and other accomplished citizens and politicians. He did so with minimal advertising, street fighter talk to Americans that at times sounded like a barroom conversation and the ability to blow through political correctness telling others exactly how he felt. Clinton on the other hand, had a preordained weak field of four competitors who for the most part got the memo that this was a coronation for Hillary to the presidency. A few stooges were needed to make it look like a campaign. However, Bernie Sanders never got the memo and although the super delegates are all lined up for Hillary and were pre-staged, who knew the Democratic Socialist would give Hillary a deep fight into the spring garnishing bigger crowds, greater grassroots fundraising and winning states like Michigan, Indiana and Kansas along with another dozen plus or so (and Americans are voting for socialism – how far have we fallen?). Clinton is really feeling the Bern as Sanders has her burning through her campaign war chest of dollars and making the democratic elite nervous. It seems to this citizen, I’d be more worried about the pending indictment. Perhaps Sanders will be in place to pick up the pieces when Humpty Dumpty falls.

Word is Hillary is having the Clinton machine PMCS’d and undergoing final checks for the general election. Trump, on the other hand is unpredictable. He’ll bring an untraditional approach to this election. Unlike his peer group, he’ll meet his competition in the mud pit and thrive there. Trump likely does his best work in the mud pit. Strategically, Clinton is probably making a big mistake attacking Trump out of the gate and firing up the Clinton Machine. Trump will thrive when cornered like a wounded animal. While the Clinton Machine is digging up dirt and will work the robo calls and TV adds targeting Trump, unlike his peer group, Trump is not intimidated. As a matter of fact, he is likely looking forward to it. Trump will return fire in full measure with all phasers and photon torpedoes aimed at the Clinton death star.

Joe & Jane citizen, what should you do? It is time to secure a MOPP suit from your local military thrift store or online through your local Doomsday Preppers group. This campaign will absolutely lack class and dignity and more resemble the worst of politics. Get ready – Tough Mudder is coming your way!

One thought on “Tough Mudder”