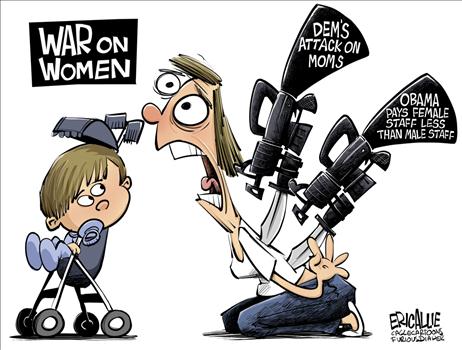 One party supposedly wages a war on women over their reproductive rights (Republicans) and another party wages the real war on women over equal pay and choosing to be a stay at home Mom (Democrats). For example, women that work in the White House today make 23% less than their male counterparts in similar positions. Or women that work in the Clinton Foundation make 36% less then their male counterparts. But yet it is the evil Republicans waging a war against women, at least this is the Democratic narrative conveniently supported by the media.  A few days ago CNN was blasting it out – bad news for women concerning equal pay.  This past Thursday CNN reported that 14 April was  “Equal Pay Day for Women” and that women make 79 cents for every dollar a man does.

These kind of numbers and articles only hit the surface. Data shows that the pay gap increases dramatically when women hit age 35 and older. That begs the question – what typically happens at this time in a woman’s life? Underneath the complaint of unequal pay is a celebration of motherhood and all that comes with it as women put their families over their jobs. Motherhood includes the joys of:

The list goes on and on. These responsibilities come with zero pay and often takes a woman’s focus away from her work as she puts the family first. Many proponents of equal pay are asking the wrong question about pay. Work and motherhood can be balanced but in many woman’s lives when they begin to clash, motherhood should win, and candidly, it is in the best interest of the child. We should celebrate women who prioritize motherhood and children over their careers. Women should not be persecuted or pressured by the feminist movement and the leftist extreme in putting their family first.

In the end it is all about work-life balance.  Women are making decisions every day to take on a career that supports work-life balance with hundreds of variables in play. While equal pay for the same job should be standard as it is in the military, we could focus on enabling women that want to work and flexibility for Moms that want more opportunity to slow down work. Why not focus on working with corporations on longer maternity leaves, part-time positions, and working from home? Complaining of unequal pay is one thing, but let’s celebrate the fact that money is not the only measure of success and no one knows that better than a woman who has chosen her family over her career and reaps the rewards of hugs, kisses and children being raised with the values she has helped instill in them.

One thought on “War on Moms”