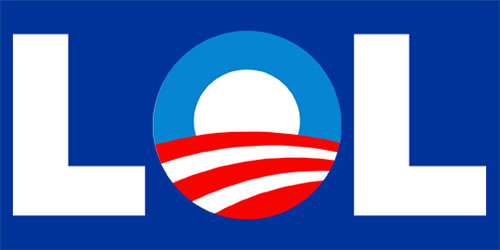 “We are the ones we’ve been waiting for. We are the change that we seek.”

Strike two: Obamacare will save “the average family $2,500 a year on their premiums.”

Strike three: “Obamacare will add “not one dime” to the deficit.”

GDP: Bureau of Economic Analysis (BEA) reported that 2015 U.S. real GDP (RGDP) growth was 2.38%. No matter what revisions are subsequently made, 2015 will have been the tenth year in a row that RGDP growth came in at under 3.0%. The longest previous such run in U.S. economic history was only four years, and the last time that this happened was during the Great Depression (1930 – 1933).

Makers vs. Takers. In 2013, according to the Census Bureau, there were 105,862,000 full-time year-round workers in the United States — including 16,685,000 full-time government workers. These full-time workers were outnumbered by the 109,631,000 whom the Census Bureau says were getting benefits from means-tested federal programs — e.g. welfare — as of the fourth quarter of 2012.

Strike One: “I am very optimistic about — about Iraq. I mean, this could be one of the great achievements of this administration. You’re going to see 90,000 American troops come marching home by the end of the summer. You’re going to see a stable government in Iraq that is actually moving toward a representative government,” said Biden. (2011)

Strike Two: President Barack Obama has described al Qaeda as having been “decimated,” “on the path to defeat” or some other variation at least 32 times since the attack on the U.S. consulate in Benghazi, Libya, according to White House transcripts.

Strike Three: ISIS establishes a Caliphate carved out of  Iraq and Syria.

Strike One: “The analogy we use around here sometimes, and I think is accurate, is if a jayvee team puts on Lakers uniforms that doesn’t make them Kobe Bryant,” Obama told Remnick. “I think there is a distinction between the capacity and reach of a bin Laden and a network that is actively planning major terrorist plots against the homeland versus jihadists who are engaged in various local power struggles and disputes, often sectarian.”

Strike Two: “I don’t think they’re gaining strength,” he said. “What is true is that from the start our goal has been first to contain, and we have contained them. They have not gained ground in Iraq and in Syria. They’ll come in, they’ll leave, but you don’t see this systematic march by ISIL across the terrain.” The Islamic State, also known as ISIS, claimed responsibility for the attacks in Paris, which killed 129 people on Friday night. Obama’s comments on the status of the battle against the Islamic State were made two days before on Thursday. (Nov 2015

Strike Three: In the interview, Wallace pointed to specific instances when the president was criticized for his reaction to terrorism. He recalled when Obama called the Paris attacks, which killed 131 people, a “setback” and said “we can’t lose sight that there has been progress being made” against ISIS. Wallace also played a clip of Obama focusing on gun control after the ISIS-inspired San Bernardino attack. Obama has come under intense scrutiny in recent months for what Democrats and Republicans call a weak and apathetic response to Islamic State (ISIS)-led terror attacks in Paris and Brussels. Obama attends a baseball game during his visit to Cuba last month immediately after the ISIS attack in Brussels, and for only dedicating 51 seconds of his prepared remarks during a speech earlier that day to the attack.

Deep but foul: “What kind of world will we live in if the United States of America sees a dictator brazenly violate international law with poison gas and we choose to look the other way?”

Strike two: “We have communicated in no uncertain terms with every player in the region that that’s a red line for us and that there would be enormous consequences if we start seeing movement on the chemical weapons front or the use of chemical weapons,” he said. “That would change my calculations significantly.”

Strike Three: After the Assad chemical attack against innocent civilians: “He was describing it as seeking strong political support for this decisive move. He had all the rhetoric of action,” David Ignatius of The Washington Post tells FRONTLINE. “But in truth, it was stepping back from the imminent attack that was ahead … it was all in motion, and at the last minute, the president blinked.”

Strike One: “We are five days away from fundamentally transforming the United States of America.” — Barack Obama, October 30, 2008

Strike Two: “If you were successful, somebody along the line gave you some help. There was a great teacher somewhere in your life. Somebody helped to create this unbelievable American system that we have that allowed you to thrive. Somebody invested in roads and bridges. If you’ve got a business, you didn’t build that. Somebody else made that happen.”

Strike 3: Obama refers to Republicans as enemies, Speaker of House response: “Ladies and gentlemen, we have a president in the White House who referred to Americans who disagree with him as ‘our enemies.’ Think about that. He actually used that word. When Ronald Reagan, George Bush, Bill Clinton, and George W. Bush used the word ‘enemy,’ they reserved it for global terrorists and foreign dictators — enemies of the United States. Enemies of freedom. Enemies of our country. Today, sadly, we have president who uses the word ‘enemy’ for fellow Americans — fellow citizens. He uses it for people who disagree with his agenda of bigger government — people speaking out for a smaller, more accountable government that respects freedom and allows small businesses to create jobs. Mr. President, there’s a word for people who have the audacity to speak up in defense of freedom, the Constitution, and the values of limited government that made our country great. We don’t call them ‘enemies.’ We call them ‘patriots.'”