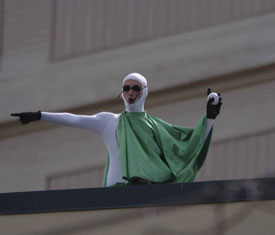 It’s a bird; it’s a plane, its Roofman!! With imaginary superpowers rivaling Batman, Superman and Spiderman, Roofman has no superpowers other than sporting green and white leotards that no self respecting man in his right mind would ever consider wearing, let alone under the guise of a mascot. What we have here is a dude that gets his jollies running on rooftops. Marked as a mascot, getting paid minimum wage and loitering around Fifth Third Field, Dayton Dragon baseball fans find themselves amused, disgusted and sometimes disturbed by Roofman’s presence. While the Dayton Dragons enjoy record attendance each season selling out for all their games, a record in the Midwest League, Roofman gets no credit for this.

As the legend goes, Roofman lives on the roof at Fifth Third Field, home of the Dayton Dragons, a Cincinnati Reds affiliate. He collects foul balls that land on the roof and uses his “special magic powers” to turn them into “softee balls,” which he autographs and tosses down to the crowd. Intended for the kids at the games, the softee balls have sometimes generated a scramble among adults fighting for the balls and Roofman’s autograph. Roofman is normally introduced with a musical introduction that let’s you know he is present and ready for battle.

After an exhausting evening of fetching balls, what does Roofman do to calm his nerves and relax after maybe getting 5 or 6 foul balls? Word is he orders up a Cassano’s pizza, picks up another bag of Mike Sells potato chips, and hits a local drive-thru for an eight pack of Little Kings seven ounce bottles of ale, a local favorite. Once a promising Ohio State University (OSU) graduate and punter for the Buckeyes, he has maximized his financial potential as a Roofman.

What do Roofman and Governor Kasich of Ohio have in common? They are both sons of US Postal Service employees; both have political science degrees from OSU and both like running, one for President and one for foul balls. Unlike Kasich who is known for being straight, optimistic and energetic, Roofman is known for questionable behavior, living in his Grandma’s basement in East Dayton and enjoying an occasional night at Katie’s Place, an entertainment establishment. He used to hang out at Clancy’s Tavern, but he got the permanent boot from this fine establishment for fighting with some Derelicts.

Sometimes late at night after several beverages at Katie’s Place, Roofman would tell stories about being an heir to the Wright Brothers, Orville and Wilbur, famous for inventing the airplane. A rival of Roofman’s known as the Dayton Flyer took great offense at this claim and sued him over fraudulent proclamations. Roofman submitted to DNA testing in 2013 and surprisingly it was proven to be true. Roofman, properly known as Rudolf, is in fact a Wright Brother descendant on his Great Grandmother’s side of the family. However, it appears the intellectual gene pool of intelligence and accomplishment ended with Wilbur and Orville. After all Roofman chases foul balls on rooftops and looks for applause to satisfy his quest for some sense of accomplishment. Roofman might not be flying at Kittyhawk but he can be found on the rooftop of Fifth Third Field on many summer nights! 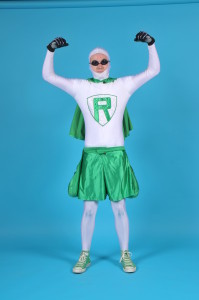