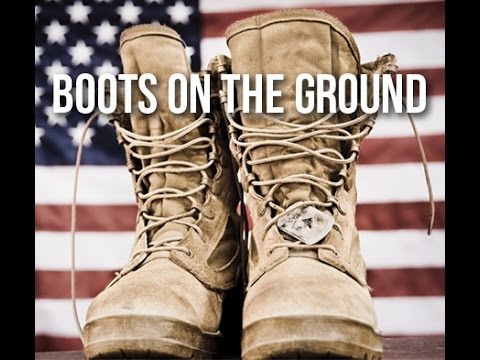 “No boots on the ground,” President Obama

Between August 2013 and July 2015, President Obama publicly pledged “no boots on the ground” in Iraq at least 16 times. What is being under reported by the American media today is that there are over four thousand American troops back in Iraq after the Obama withdrawal, to enable the Iraqi Army and fight ISIS. Inevitably, the “train, advise, assist” label that President Obama has stated will morph into direct action and support roles as the Iraqi Army meets difficulty and falters. Furthermore, the Chairman of the Joint Chiefs of Staff (CJCS) General Dunford, recently commented that there are fewer than five thousand troops in Iraq, as troops and units rotate in and out. So it is very merky just how many troops we currently have in Iraq, what their exact roles are and what the mission is. There are no daily press conferences covering this deployment, just small stories occasionally being reported, mostly online, due to congressional inquiry. The Commander-in-Chief has not explained the mission in an address to the nation. Five thousand troops is no small number either; last we heard there was going to be “no boots on the ground.” President Obama has ordered the equivalent of a US Army Brigade’s worth of troops and Special Forces back into Iraq? “Shush …”

With great fanfare the president withdrew troops from Iraq by the end of the calendar year 2011. After failing to secure a Status of Forces Agreement (SOFA) with the fledgling government of Iraq due to his opposition of the war and it being low on his priority list, he met his real goal of complete withdrawal. The CJCS recommended a residual US force presence of ten thousand troops as a stabilizing influence, which would have served as a deterrent to terrorist elements and created a stabilizing influence between Shia and Sunni sects as well having Americans around. But the President is a “date certain” leader and chose a date on the wall for political purposes to withdraw US forces. The president wasn’t about to let facts or mission stabilizing criteria get in the way of his predetermined decision to get out . It was about a date. It has always been about a date with this president whether it is Iraq, Afghanistan or Obamacare. It had to be done by December 31st, 2011 so he could take credit for “success” as he ramped up his re-election campaign.

“And under the Status of Forces Agreement with the Iraqi government, I intend to remove all U.S. troops from Iraq by the end of 2011,” said Obama. “We will complete this transition to Iraqi responsibility, and we will bring our troops home with the honor that they have earned.” Obama

The buzz words in theater during this time was “Responsible Drawdown.” Everything was masked in these words. Political speech for we are leaving regardless of the situation. The plan was to design a plan without criteria for withdrawal but checkpoints on force levels in Iraq, returning US facilities to the Government of Iraq (GoI) and releasing all detainees back to the GoI or local Imams whom “promised” to safeguard them from returning to terrorism. It was a race to get out regardless of circumstances on the ground. No exit criteria just a date certain to be out of Iraq.

So here we are, four years since the Obama withdrawal from Iraq and we have five thousand troops back in Iraq due to his failure to personally negotiate with the GoI for a SOFA and residual US Forces to help stabilize and secure the gains of war; his failure to take counsel from his CJCS and Secretary Defense Gates; and his self-serving goal of meeting a campaign promise to help his presidential re-election campaign.

Where are we today?

The Obama Administration has demonstrated complete foreign policy failure throughout the Middle East where our enemies do not fear us and our Allies do not trust us. President Obama has fundamentally transformed the Middle East into a continent of chaos through his arrogance of power, lack of leadership and lack of experience in appreciating and understanding history. The gains made in Iraq through blood and treasure have been pissed away by a US president that failed to appreciate the importance of America leading in this troubled world through a clear understanding of US strategic interests and responsibilities versus a self-serving prism of righting American wrongs throughout the world.